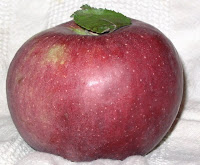 Also known as Stayman Winesap, though the Winesap is a different (and even older) variety.

These run medium to large and have a deep red blush that is matte rather than glossy, freckled with light spots. The Stayman I am sampling today is on the large side and is oddly asymmetrical--from one angle its profile describes a rough parallelogram. It sits nice and firm in my hand.

The flesh is a creamy off-white, not as fine-grained as McIntosh and its offspring, crisp but yielding, and a little dense. You chew a bite of Stayman a bit longer.

The flavor is well-balanced and cidery. Sweet and tart are in good proportion, but the dominant impression is mellow, with just a hint of acidity. There are pear notes, and a lingering suggestion of spice in the finish. Not bad!

In some respects the simple and direct flavor suggests that of Melrose, but unlike that variety Stayman is both less sweet and is balanced by a little tartness. That difference alone makes it a better apple with a lively flavor.

Update November 2011: I just had one of these I'd been hanging onto for more than a month. It was really first rate, wonderfully crisp and juicy, spicy and with some savory Winesap-like goodness I'd missed in October.

Stayman ages well. I wish I had a few more!

All About Apples says Stayman was discovered in Kansas in 1875. (Wikipedia, without citation, says 1866.) Beth Hanson (among others) asserts that Stayman is a seedling offspring of the true Winesap.
Posted by Adam at October 11, 2008