Quality apples are flooding in from China, Washington state, and South America, keeping local apple growers at bay, excluding them from the wholesale apple market. 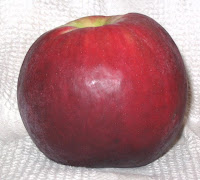 This medium-sized apple has a striking appearance: a deep purplish crimson sparsely accented by small light speckles in places. It is clasically round with light ribbing.

Jonathan's flesh is yellow, fragrant, medium-dense, and somewhat tender, though it chunks off nicely.

The flavor of this apple is very different from the crisp tart-sweet blends of the McIntosh family, though there is both tartness and sweetness plus a nice astringency. The flavor is full and cidery, a little spicy with strong pear notes and a hint of melon. I'd like to have some cider made from this variety.

Some sources trace Jonathan back to 1864. 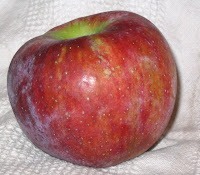 This McIntosh cross (with Ben Davis, a nearly defunct variety) is prized for salads and fruit cups because it browns only slowly when cut. But doesn't it deserve to be taken seriously for its other qualities? Cortland has been around for more than a century.

This medium-large fruit is painted with a streaky red blush--deep red in spots--over yellow-green, with light tan spots. It is firm in the hand and noticibly ribbed.

The flesh is everything you'd want from a McIntosh heir: snowy white, fine-grained, crisp, and loaded with sweet juice. The taste is pleasant but unassuming.

Despite a little spicy bite at the begining, Cortland's flavor is mild, generally sweet, and cidery. It's not syrupy by any means but there is very little balancing tartness or acidity. The peel comes forth in the finish.

Like Macoun, Cortland was introduced by the New York State Agricultural Experiment Station in Geneva at Cornell. It is also popular for pies.
Posted by Adam at September 26, 2008 leave or read comments (3 so far)

This is Not An Apple 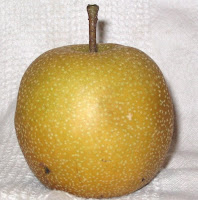 This fruit is medium-small, but they can grow large. The skin is a rough golden brown with light spots, and the flesh is crisp, sweet, coarse-grained, and very juicy--like, but denser than, the flesh of a watermelon.

The flavor is light and sweet and watery, and eating one is refreshing.
Posted by Adam at September 24, 2008 leave or read comments (2 so far) 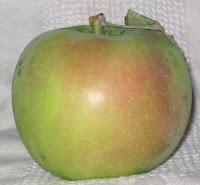 It is medium-sized and, as the name suggests, a bright Kelly green. The fruit I am tasting has a small and faint red blush and also some odd black stippling over part of the skin--some kind of russet I imagine. There are dark green spots that are light colored in the blush. 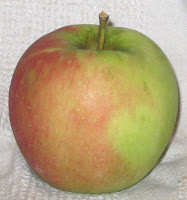 Several varieties made their seasonal debuts at Arlington's farmers market this week, including the singularly wonderful Macoun (whose praises I shall sing another time) and Swiss Gourmet. 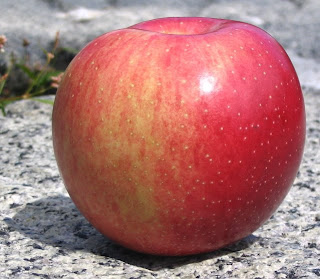 A few orchards grow "heirloom" apples. Opalescent, which was introduced in 1880, qualifies as an antique variety. Here's the text of the sign that Volante Farms posted over a bin of these apples:

This big, primarily dark red beauty is juicy, firm, and pleasant in flavor. Opalescent was introduced in 1880. 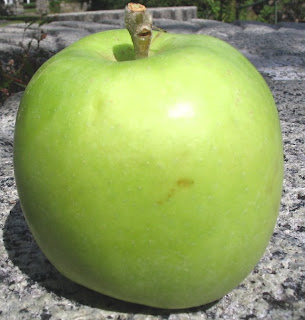 I bought one of these big guys at Volante Farms yesterday. Volante says this about Mutsu:

This Japanese apple is a descendant of the Golden Delicious. It is large, spicy, crisp & juicy. Excellent all-purpose apple.


Various sources say this is the Crispin apple by another name.

Mutsu is bigger and greener than Golden Delicious, whatever its relation.

This is a large fruit, almost cylindrical, with definite ribs and a light green-yellow skin.

The color varies from green-yellow to yellow-green and has darker green spots perhaps a tenth of an inch across, some with tiny white centers and some with tiny brown ones.

A pause at the market 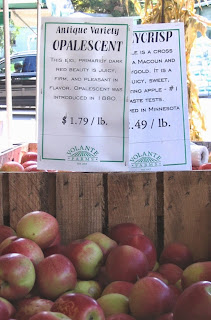 After a flood of early apples, things have slowed down.

Last week there were only three varieties for sale at Arlington's farmers market, none new (though the ever-so-sweet Honeycrisps made their debut the week before).

Does the end of the early-apple season mean fewer choices? Fall, the traditional apple season, brings many known favorites. Does an apple farmer dare to dabble in little-known fruit when the market wants McIntoshes and Macouns?

Some do. Earlier today I paid a visit to Volante Farms, which had more than a dozen varieties for sale, including a few heirlooms. Volante (in Needham Heights) is an apple lover's idea of a farm stand, with each bin of apples helpfully documented.

I hope that some of these varieties make it to farmers market this year. As much as I esteem those justly popular Macs, and really love Macouns, variety is the spice in the applesauce of life. We do see Baldwins and Roxbury Russets every year, but of course not until October. 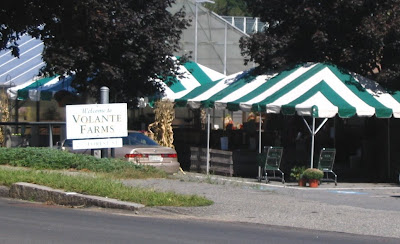