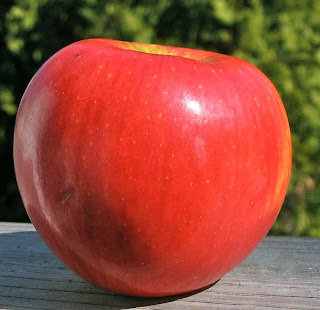 To my surprise and pleasure, there's a new variety to try. In March.

I am holding a medium-sized apple with an orange-red blush over yellow that is tinted with a little green. There are darker red streaks in the wash of the blush, and tiny dark lenticels that are widely spaced.

The fruit is well-formed, slightly ribbed, and firm. There's a little russet in the stem well and the calyx is loosely closed. Her faint sweet aroma suggests both apples and pears.

Alice is quite sweet, with a little redeeming tartness. As is sometimes the case with sugary apples, the initial taste impression changes as the sweetness overwhelms some of the more delicate flavors. Alice starts out with cane sugar and a hint of honey with lemon or perhaps pineapple, balanced by a suggestion of Wickson's malt and Golden Delicious's low vegetable note.

The malt asserts itself, and the citrus fades, after a few bites as the sweetness really takes over.

Although I wish she were not quite so sugary, Lady Alice provides a very agreeable mix of flavors and her crisp hard crunch is especially rewarding. I immediately regretted that I did not pack two.

Alice was a foundling, a chance seedling that rivals any product of an organized breeding program. But her story is a little unusual.

According to the Rainier Fruit Company, which owns rights to the fruit,

While cultivating the neglected orchard in 1979, a plow disc hit the base of a Red Delicious tree injuring its trunk. The damage tree sent out a new shoot. The new shoot had a decidedly different appearance from the rest of the tree so the chance seedling shoot was allowed to grow and bear fruit.


Rainier goes on to say, "Since the new tree was discovered in an orchard with many different varieties of apple trees scattered throughout, its parentage is unknown."

Well yes, but if the plow-disc story is true, Lady Alice is not a by-blow from any of those trees. Since physical trauma does not, as far as I know, produce genetic mutation, this sounds to me as though we are happily tasting the fruit of the root stock to which the Delicious apples were grafted. (Or perhaps one of my learned colleagues will set me straight and explain the real story.)

No one looks to root stock as a source for new varieties, so I guess the apple gods were smiling on us the day this happened.

Rainier is the sole marketer of these apples, which is in short supply. The orchard says they will only be available in March for now. Availability will grow if Alice catches on.

I don't have enough of these to try, but Alice has qualities that recommend it as all all-purpose apple. She is hard enough, probably, to stand up in pies and tarts. Cut, she does not seem to turn brown, so like slow-oxidizing Cortland she would be a good choice for salads. She's great for dessert, and with all that sugar and interesting flavors I'd just love to try some hard Alice cider.

Because Alice is so crisp and fresh in March, I guess she must be starchy when harvested in the late fall, all that starch turning to sugar over the winter. Buy a bag of these this month if you are lucky enough to see them. I went back for more but came away empty handed--until next year.
Posted by Adam at March 23, 2010