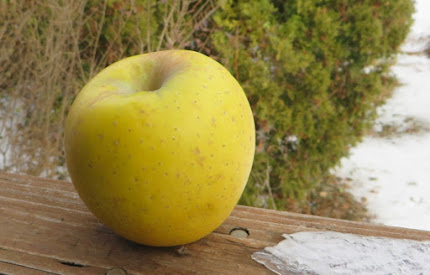 These classically shaped apples run medium to large with next to no ribbing. Lenticel dots are dark when russeted, as most are, but otherwise hard to see against the yellow peel.

The stem, absent from my photographed example, is long and thin. One of the apples has a green tint in the yellow.

These apples have a matte finish and are a little soft. Both have small areas that are starting to wrinkle. Spoiler alert: no fear, these still make very good eating!

They have been off the tree since mid September. We shall see how they fare in late December.

The light yellow, medium-grained flesh has a little give to it, but the crunch is still very good after two months in storage. The quality of the crunch makes me think of a GoldRush.

Crunch-a-Bunch has a small amount of honey flavor, but the bulk of the sweetness—and there is a lot of it—has a very pure cane-sugar quality.

Some bracing acidity enlivens the apple, and allows a little vanilla, or perhaps banana, to play out, along with a hint of pear-and-lemon, and a general fruitiness.

Is sugar ever a detriment to taste? I feel as though Crunch-a-Bunch could do with a little less of it, but this is still an enormously satisfying apple, and its keeping qualities are excellent.

According to the patent, this apple (whose official variety name is the unlovely but functional MAIA7) is an open-pollinated Honeycrisp.

Marketing material for the apple calls Crunch-a-Bunch an "early GoldRush" type and speculates that GoldRush could have been the pollen parent.

If so, Golden Delicious is Crunch's grandmother. It would be interesting to know how this variety compares to GoldRush's extraordinary keeping qualities.
Posted by Adam at January 12, 2020