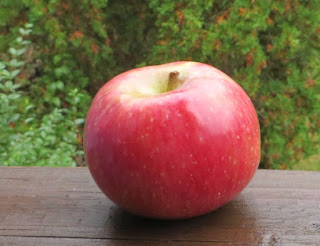 Joe Podles, who lives here in Massachusetts, named this apple (after "Cue," his dad) and has grafted it for other growers.

Back in the day, that would have been enough to make Cue's Favorite a full-fledged named variety.

In 1880, there might have been a report about Cue's Favorite in the proceedings of some horticultural society, and that would be that.

Perhaps Spencer Beech would have collected it into his book, the Apples of New York, in 1909—without as much as a single plant patent, trademark, apple club, or or Twitter account in sight.

But today this pleasing apple has no such status, and Cue's Favorite is but a nickname.

Which means, gentle reader, that your options for finding this apple are limited.

More on all of that below the fold. At farmers market, careless vendors sometimes confuse these two varieties, which are thought to be related (Stayman, son of Winesap). But they are not the same.

How then does each stack up against the other? 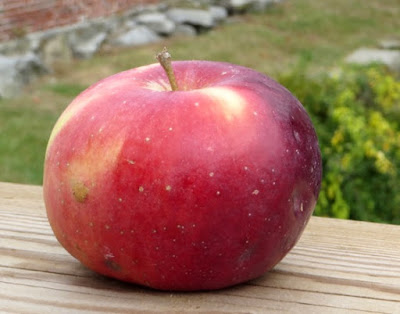 “Bonkers” is a nickname for this otherwise nameless apple, but one that is used widely.

These can get positively huge, but I bought two that are merely conventionally large (one a little runty, in fact). Why: it’s mid October and I have to leave room to eat more apples.

The apple in the photo is squat and trapezoidal. Its cross section from the top is oval, rather than round. Turns out there is a reason behind the odd shape, though they aren’t all like that.

Ashmead's Kernel, Roxbury Russet, and Golden Russett. When you see these three gentlemen, you know that the heart of the harvest has arrived.

Join me for a taste.

A boom in heritage apples, in the UK 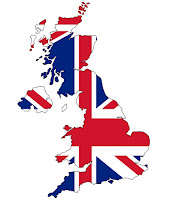 The Guardian, in a story published on Apple Day (today), describes


According to the story,

Britain is enjoying a remarkable apple boom, as hundreds of new community orchards revive lost varieties and contribute to a thriving heritage market.


These include many varieties not catalogued by the National Fruit Collection.

One organization even employs an Apple Diversity Officer. Now, there's a job to dream on!

Gather ye Apples while ye May 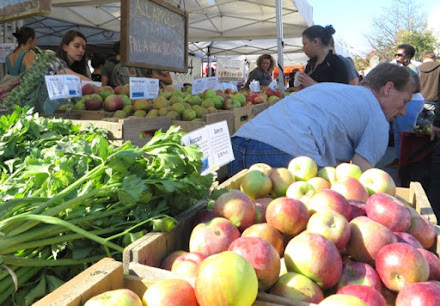 Is there a fitter name for an apple that is cold-hardy down to −40° F? (The tree, not the fruit.) 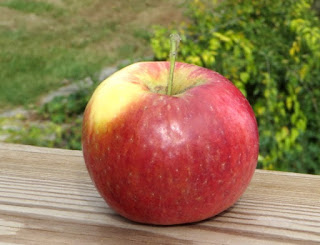 But the best thing? It's really good. 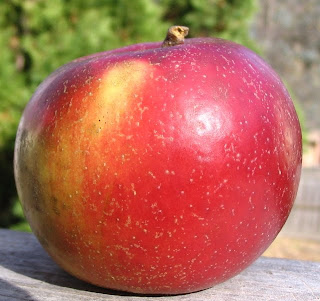 Once the king of American apples, this variety is named for the Revolutionary War hero who popularized it.

Baldwins are crisp, hard, and richly flavored. They mellow in storage. 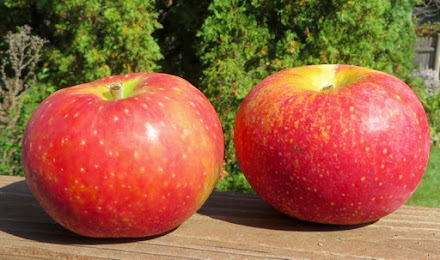 Long have I sought to pair these two English apples. Cox's is legendary, and Ribston, also known as Glory of York, is widely supposed to be Cox's parent. 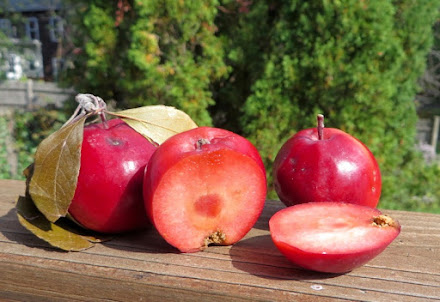 According to the grower, these diminutive crabapples—the largest might be an inch tall—are super tart and used to make cider.

The staff at Shelburne Farm told me that these were Firecrackers. Maybe they are, but I have some doubts, aired (and resolved) later in this post.

The apples are certainly pretty enough, though imperfect. This orchard sustained a good deal of hail damage last summer. 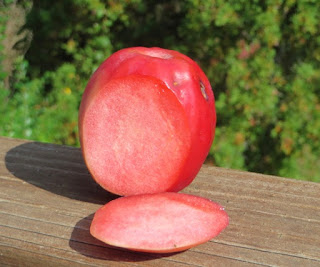 I do not know if the name of this apple is an error, a joke, or something else (named for a Mr. or Ms. White?), but I was not expecting this flamingo-pink interior.
The elongated, olive-shaped  fruit is small, though large for a crabapple, about 2 inches high. Each has a glossy peel that blushes from a delicate pink-orange wash to a saturated red. 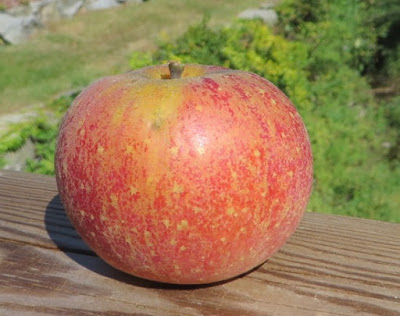 Spoiler alert: No strawberry flavors in mine. And it might not even be the right apple (but I think it is).

I have two of these charmingly named apples (SheNANGo, or so I imagine), medium sized, oblated, and with the merest ribbing.

The streaky red blush covers yellow green and is a dull crimson at its deepest. Prominent large light lenticels decorate the Strawberry's face. They provide some tactile bumpiness, and the strands of russet are rough to the touch.

There are also dimples and divots from hail, a grassy aroma, and a satiny finish. 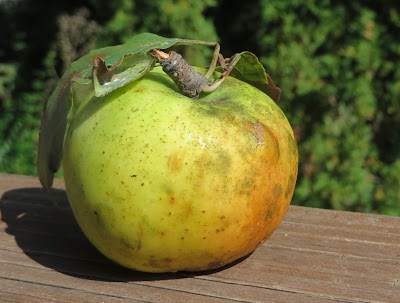 That part is a little less straightforward, but in regard to apples if you read the link you will see why I take the word to be a claim of a kind of quality. A reinette is a cut above.

So "Reinette Clouchard" suggests a quality apple, but one with a rough common touch.