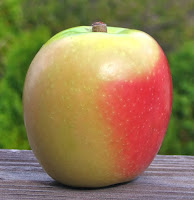 This medium-sized apple (many quite small) is elongated and conical. The not-so hidden blush is a solid fuchsia-tinged red over yellow green, but there is also a thin peach-pink wash of blush, delicate and pretty, over much of the back and sides.

Small light lenticels stand out against every background. In the right light they almost seem to glow.

There's moderate ribbing, and a thick stem in a shallow stem well.

The apple is rock hard with a sugary sweet aroma. Its calyx is shut and an unusually thick stem emerges from a shallow stem well.

Oh, my, it's another pink-fleshed apple! So that's the hidden rose. I had no idea.

Well, there is nothing mushy or mealy about this apple.

Its fine-grained flesh, half pink, half creamy white, is crunchy crisp, dense, even hard.

Another sample is solid pink except for the seeded center.

Hidden Rose's flavors strike a good sweet-tart balance and last to the end of the chew.

Rose's tastes include an astringent, vinous note, some generic citrus, a hint of citrus peel, and something lush and sweet that is very like fruit punch. Nice!

The rose inside of Rose is stunning, but I would like this apple even with a more conventional appearance.

This is only my second pink-fleshed apple ever, just a few weeks after my encounter with Pink Pearl. What are the odds?

Other accounts of this apple online describe a "cotton candy" flavor. Fair enough, but I am sticking with fruit punch.

Hidden Rose was found in Airlie, Oregon, in the 1960s. Today this variety goes by multiple names, sometimes accompanied by extravagant claims. Several growers each boast of being the sole source of this fruit.

However it seems likely that Hidden Rose, Airlie Red Flesh (sometimes corrupted to Aerlie Red Flesh), and Mountain Rose are the same apple. According to Eric Schwartz of Thomas Paine Farm Hidden Rose is a trademark for Airlie, the actual variety name.

Eric writes to say that Airlie was first discovered by the Newell family but then lost. It was "rediscovered" by Louis Kimzey in the 1980s; Kimzey and Schwartz "planted the first orchard ever in 1992."

This was the "Newell-Kimzey" variety; the trademark "Hidden Rose" followed. More here.

Eric says there's nothing to the story that Airlie is a different red-fleshed variety also found in Airlie (something in the soil?).

Meanwhile, another red-fleshed apple from Oregon, Mountain Rose (not the regular-fleshed apple of the same name), looks a lot like Airlie.

Not much information about any of these varieties online, but Mountain Rose is associated with many conflicting stories, all romantic.

It's an "extremely rare and limited" Japanese heirloom! No, it's a "spontaneous hybrid of crabapple and golden delicious," a "rare heritage breed."

Maybe. Or, Occam's Razor, they are all the same apple marketed under different names.

It's interesting to watch several growers fight it out for brand ownership of a variety that is in the public domain. ("Hidden Rose" is a trademark, but the apple is not patented.)

But let's not lose sight of the fruit itself, which is crisp, balanced, tasty, unusual, and very good.

Thanks to Amy Traverso for sharing some of her research about this apple and its aliases. Any opinions, and errors, are entirely my own contribution.

Update: Thanks to Eric Schwartz for further untangling the story behind this variety's many names. I've revised this review accordingly.
Posted by Adam at October 27, 2013