A famous cooking apple, sometimes called "Northern Pie," this heirloom is also great for eating and is still enjoyed across the Northeast. 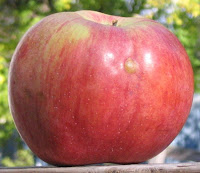 My example has a small patch of tiny black russet spots, a wen-like extrudence, and numerous small dents and bruises.

Most of these are probably from my own ham-handling, but they suggest a sensitive vulnerability.

So, no beauty queen, but a right stout-looking apple. It smells faintly, and sweetly, of cider.

The flesh is yellow, juicy, and coarse. The bite is a little tender but still crisp. I'm not sure when this was picked, but the texture turns just a little mealy into the chew. The apple oxidized quickly.

A hint of acid tartness gives this apple a bit of life and character on the tongue. Still Northern Spy is mostly a mild cidery apple with a few higher notes. Hint of spice, pear, and cherry, very agreeable.

Many sources repeat, without attribution, the story that Northern Spy was found in an orchard in East Bloomfield, New York; some of these provide further information. The basis for this history may be an 1847 letter from Oliver Chapin, who wrote

The first Northern Spy apple trees were raised from seeds brought from the Northwest part of Connecticut, about the year 1800, by Elijah Taylor. The original tree was set in an orchard by Heman Chapin, and some sprouts were taken from it by Roswell Humphrey, and by him the fruit was first raised...as the original tree died before bearing. (original emphasis)

The American Chemical Society found that Northern Spy (and two other varieties) have the most antioxidents of any variety of apple.

On that scholarly note (who says you can't document this stuff?) the legendary Adam's Apple Research Department is pleased to call it a day.