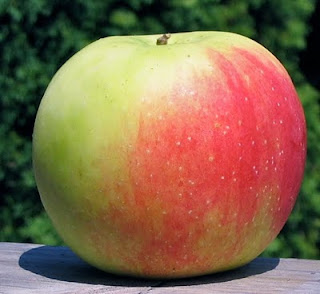 This large medium-sized apple is round with only a faint trace of ribbing, a cheerful yellow-green partially covered with a streaky blush of vivid red with orange accents. The lenticels are a slightly darker green on the skin and lighter in the blush.

Wealthy feels reasonably firm and has no appreciable aroma.

The flesh is a somewhat tender--but crisp--medium-coarse white tinged with yellow, bearing juice that is tart but not unbalanced. There is a little banana, lemon-lime citrus, something like tart strawberries, and some fizzy acidity. This constellation of tastes approaches the vinous quality without hitting it dead on.

Wealthy's flavors are layered, interesting, and refreshing, with a pleasantly astringent finish. Tart-averse palates might be better off with Mollie's Delicious (I bought these two varieties the same day), but for my taste buds Wealthy gives Gravenstein a run for best of August.

Wealthy was first recorded in Minnesota in the 1860s, an open-pollinated seedling of a Cherry Crab. For a charming history of this variety, including the meaning of its name, click here.
Posted by Adam at September 13, 2010