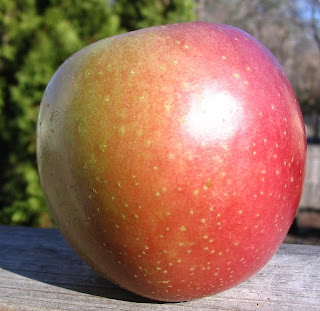 Spencer is shapely, on the large side of medium-large, slightly ribbed and slightly conical.

The light red blush is not saturated; it almost lets the yellow-green skin peep through.

On my sample it covers perhaps two thirds of the surface, and there are light green lenticels throughout. The calyx is open to reveal great depth behind it.

The flesh is crisp and a little tender, perhaps past its prime. It is white and dense and juicy as befits a descendant of McIntosh. 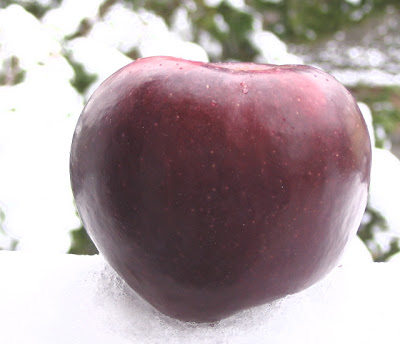 Our winter beauty is an exceptionally dark Macoun.
Posted by Adam at December 25, 2008 leave or read comments (4 so far) 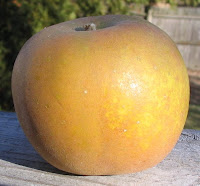 Got a few more of these at Red Apple Farm and they are in better shape than the one I initially reviewed, which may not even be a Golden Russet at all.

These apples are coppery brown almost all over except around the crown and in streaks radiating down the side. A few have slightly larger unruseted patches.

They are small (or on the larger side of small) and slightly ribbed, with open calyxes.

The flesh of Golden Russet is crisp and juicy, creamy yellow, and coarse. Clean sweet-tart balance with a little bracing acidity, notes of cane sugar, vanilla, lemon, and pear. Nice!

I'm unsure of my original Golden Russet example, which I've relabeled as unidentified. It might just be an anomalous sample; my thoughts about that are here.

Variously recommended for cooking, eating, and cider, Golden Russet has been grown in New England for two hundred years. 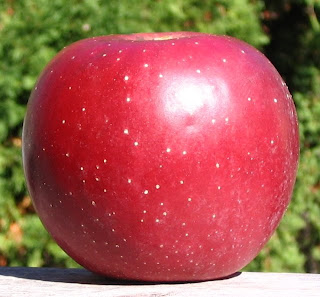 The blush on this handsome medium-large fruit covers all, but ranges from a lighter orangey red to deep crimson on the sunward side. Large white lenticels are an attractive decoration. The apple is slightly conical, slightly lopsided, and slightly ribbed. The whole apple is firm and has a mellow and sweet aroma that reflects its Golden Delicious ancestry.

I now suspect that my original Golden Russet review may have been based on the wrong apple. In any case, it does not describe a representative sample of this variety, several of which I have been enjoying since Thanksgiving.

Consequently I have retitled my first review "Mystery Russet" and have posted a new Golden Russet description . 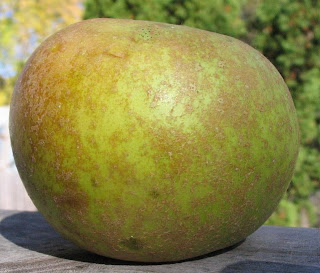 I originally bought an apple so labeled from Kimball Farm at the Arlington Farmer's Market in October, and wrote up a review accordingly. I'd have bought more than one but was back then was straining to taste as many of the then-dizzying number of varieties as I could.

That apple was interesting but a little mealy. I did the best I could with it. 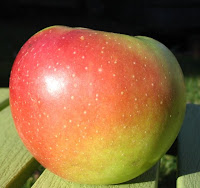 These globular apples run to medium-large with a red blush, patchy in places, covering green. There is a little ribbing, and my sample has a few bruises and a spot of the eminently ignorable flyspeck.

The flesh is a creamy white with yellow-green highlights, and at this point in the season (note: mid-November) is tender-crisp and juicy. No acidity to speak of. The flavors are balanced with sweetness predominating, and there are hints of berries and a whiff of spices in the general cidery taste, a distinctive touch. 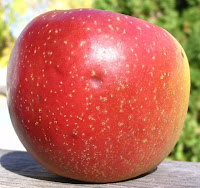 Monroe is medium-sized, slightly conical, and clearly ribbed. Attractive red blush covering a green-tinged yellow. Many irregular light-brown lenticels. My sample has a light dusting of russet, plus black specks, plus other blemishes. It smells of cider.

The light yellow flesh is on the finer side of coarse (if that makes sense) and is more tender than crisp. Flavors: Cider, a brief hit of roasted grain, rich and mellow with moderate sweet-acid balance.

This is not a common variety and I suspect my sample had been off the tree for a few weeks. However I really enjoyed its even flavor.

Monroe looks and to some extent tastes like an old-fashioned apple but was introduced in 1949--one of the hundreds of varieties introduced by the New York State Agricultural Experiment Station in Geneva, New York. It is a cross of Jonathan and Rome Beauty.

Props to Gould Hill, where Hampshire was born (map). This modern apple originated the old-fashioned way--as a foundling, not as the product of a breeding experiment. 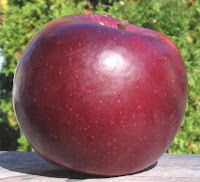 Handsome Hampshire has a wine-dark blush freckled with light lenticels of varying size. It is medium sized and well formed, slightly conical and slightly ribbed. Its calyx is open.

My apple is at least a few weeks off the tree (at tasting, not posting!), but remains very crisp and juicy. The flesh is a creamy white and just shy of fine-grained.

The flavor is rich and sweet, with nice balancing tartness and acidity. Volante, who sold me this apple, describes Hampshire as "similar to McIntosh," and though that is not really accurate I can see the resemblance in its wine-like depth and hints of flowers and spice.

In some ways maybe Macoun is a better analogy, though Hampshire does not reach the complex intensity of either Macoun or McIntosh. There's some nice lingering astringency after the finish.

Hampshire is an outstanding late-season choice, and a good keeper to boot. It oxidizes slowly.

Note: As of 2009, Brogdale's web site is no longer the host for information about the National Fruit Collection, including the database of apple varieties. I've lightly editing this posting to reflect that and to provide live links.

Despite a slow and unintuitive user interface, Brogdale's searchable catalog of apple varieties in the the National Fruit Collection (in Kent, England) rewards the persistent with perhaps the most comprehensive list of apple descriptions online anywhere. As of late 2008 the index describes and depicts 1,882 distinct varieties.

Brogdale's catalog is a database, part of the deep web that is not indexed by internet search engines. You won't find these descriptions and photographs in Google; you must dig for them.

The story of this antique apple is especially bound up in the place where I live in Massachusetts. Baldwin originated perhaps as early as the 1740s in an orchard a pleasant dozen miles' bicycle ride north of where my house sits today. It was cultivated and popularized by Loammi Baldwin, a Revolutionary War colonel who was also the chief engineer of the Middlesex Canal. 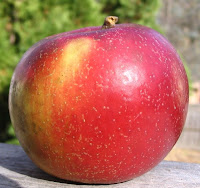 Any of the above might make a rewarding study, but I'll stick to apples.

All the Baldwins I've seen this year are on the small side, so I am tasting a medium-sized apple with a saturated blush of cheerful red that mostly covers green yellow. There's russet that is centered around the base, where the calyx is for the most part open; many small light lenticels decorate the skin.

The Baldwins have been through the wars this year and have the scars to proved it. Besides the russet--which also crackles the blush in patches--there's flyspeck and many round smudgy spots, which I take to be the evocatively named sooty blotch. These marks are the same size as hail scars.

Baldwin is a little ribbed, some more than others. It is very firm in the hand.

The flesh is firm, crisp, medium coarse, and light yellow. Baldwin is juicy with a rich, even taste, balanced sweet and tart enlivened by acidity. Older Baldwins are quite palatable too, though mellower, not acid, and less crisp. Cider, trace of pear, and some spice make this worth seeking out in October or later. Some pleasant astringency after the finish.

Get the right tool for the job, right? Look at what happened when my apple slicer met the mighty Blue Pearmain: 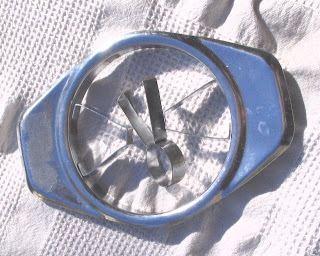 That is one tough apple.

The seller was clear: Blushing Golden improves with age. So I have kept my apple refrigerated for nearly a month. 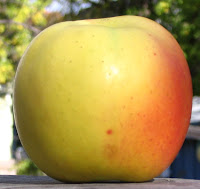 Now for the moment of truth.

This is a medium-to-medium-large apple with a thin orange blush over perhaps a third of its otherwise yellow surface. It is ribbed and decorated with lenticels that take on three distinct appearances: in the blush, as darker spots of blush, and elsewhere as dark brown or, fainter, dark green spots. There are a few patches of flyspeck and one of regular russet. The fruit smells sweet and cidery.

The flesh is creamy yellow, medium coarse, juicy, and crisp, which is very pleasing for an apple that has been off the tree for so long. The flavor is lush and rich: a balanced sweet-tart, with a little lively acidity. It has something of the even sweetness of a Golden Delicious and hints of pear, honey, and banana.

This is a good late-season pick and I am pleased that I was able to buy some more on the day before Thanksgiving--the final day of the Davis Square farmers' market.