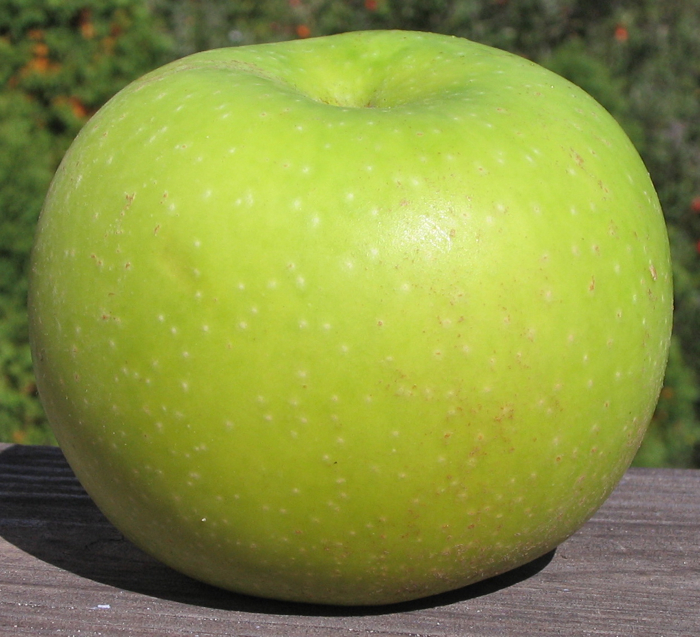 Not gold but light green, this large apple has a classic shape with a small amount of ribbing and a slight conical taper.

The green is subtly stippled and the peel has a matte finish.

Grimes sports no blush but each of my samples has a side that is smoother and shinier within which the large light lenticels are easier to see.

Both apples also have small webs of russet near their bases.

Grimes Golden is firm to the hand and has a lovely smell of pears and (sorry to be recursive) apples, with a whiff of vanilla.

These aromas recur inside as flavors, where crisp medium-coarse flesh is light yellow, crisp, and juicy. There is enough tartness hidden away to bring out subtle tastes: cane sugar, vanilla, cream soda, and a hint of pear.

Grimes is a very fine apple, easy to eat, light, and full of flavor.

Even the peel adds a harmonious nutty note. Everything in this apple works together extraordinarily well.

Grimes Golden originated in West Virginia around the turn of the 19th Century. Many believe it is a parent of another West Virginia found seedling, Golden Delicious. Orange Pippin has some interesting historical notes, and Calhoun has more detail.

Grimes G is an unusual self-fertile apple: one tree will pollinate itself. Though crisper and tastier than Golden Delicious it is not as reliable or sturdy for shipping long distances.

Thus commerce decides for us what choices we will be allowed to have. I'd choose Grimes if I could.

The apple is memorialized by a park and historical marker in Wellsburg, W. Virginia (map).