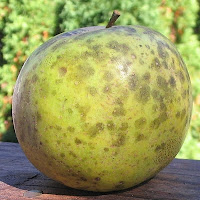 The green apple with the Dutch name is on the large end of medium-sized and moderately rubbed.

Beneath all that superficial sooty blotch (this is from Tower Hill's very-low-spray heirloom orchard), Swaar is two-toned, a bright spring green over a greenish yellow.

There is a subtle hint of orangey coppery blush in a few spots; click on the photo for a better look.

Russeted lenticels are all but lost in the intricate tattoo of russet, flyspeck, and the previously noted blotch.

There's just a little give to Swaar, but it still feels pretty firm. Its calyx is partly open and the fruit has a sweet smell that is slighty musty.

Swaar's flesh is on the coarser side of fine-grained, a light yellow cream color. Its flavor is well balanced and full-bodied, with pleasing sweet and tart elements in equal measure.

Swaar is crisp without being crunchy and very pleasant to eat, leaving a light lingering sweetness behind. There a little gingery spice and vinousness, and a hint of something softer like vanilla (but, not vanilla exactly) and pear.

This was one of several heirlooms from Tower Hill that I especially enjoyed. I completely understand why these and many others are not generally available, but it is a keen loss.

Swaar, which means "heavy," comes from the early Dutch settlers in the Hudson Valley of New York. Trees of Antiquity says Swaar is a good keeper that improves with some storage.

I commend this variety to you, though it is not much grown; Swaar was described as only a niche variety even in 1905, in Spencer Beech's Apples of New York. Beech et al. say Swaar is also known as Hardwick.
Posted by Adam at October 31, 2010