A Mac in May

McIntosh does not keep or travel as well as some varieties, but because of its historical popularity this variety is available year round in the Northeast.

Mine was harvested last fall, probably somewhere in New York, and likely refrigerated in a controlled atmosphere to retard spoilage. It has no aroma and very large light lenticels.

By springtime McIntosh's flesh is still a dense white with green highlights. It's still crisp, though tender, and the flavors are a washed-out echo of Fall's complex bite. There is a nice sweet-tart balance, with a suggestion of berries, a nod to this variety's vinous qualities, and a slightly astringent finish.

If the spirit of this later Mac is attenuated, the flesh is downright weak--it melts to nothing in one's mouth, leaving the peel, which is chewy but not unpleasant.

Though a shadow of its true self, this is still a pleasant and refreshing snack. It's also a demonstration of the potency of modern storage techniques and a preview of next Fall's bounty. I give it four months until this year's Macs are ready to eat.
Posted by Adam at May 29, 2009 leave a comment

The big distributors keep apples fresh by refrigerating them and by suppressing the fruit's natural production of ethylene. This relatively simple hydrocarbon is in effect an apple hormone that triggers ripening, overripening, and rotting.

One widely used technique is to store apples in airtight rooms from which oxygen has been reduced (from 21% to about 5% or less). Storage facilities also may control humidity and carbon-dioxide content, and use ethylene scrubbers. These techniques are know as controlled atmosphere storage and facilities are licensed (here are some typical requirements). The apple industry often just refers to this as "CA." 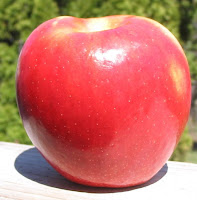 The blush on this attractive, medium-large apple is saturated over about half the otherwise green-yellow surface and is streaky or blotchy elsewhere. The fruit is conical and decorated with small light lenticels in a bottom-to-top pattern: many clustered together it the bottom but few at the top. The effect is as if they are radiating or rising from the base like bubbles in a champagne glass.

The unbroken fruit is reasonably firm and has only a very faint sweet aroma.

Jazz's coarse flesh is creamy yellow and very crisp and juicy. The first bite is nicely satisfying. Jazz is sweet, but not overpoweringly so. Its flavor is very light and delicate with cane-sugar and perfumed floral notes, and an elusive hint of orange juice.

Where the cultivated things are

Public Radio Kitchen, which is WBUR's yummy and eclectic food blog, has a handy online map of farmers' markets in Massachusetts.

No apples until July, but Central Square's weekly market opens June 1 at 11:30 AM. 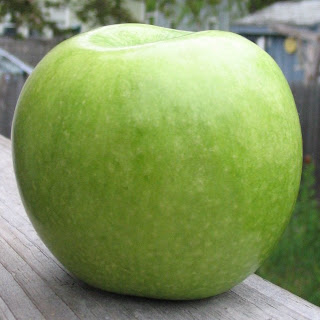 Distinctive Granny Smith breaks the mold of sweet-and-similar industrial apples. It packs some real acidity. And, that color!

Large and classically shaped, this variety is slightly ribbed and slightly tapered (though more cylindrical than conical). The skin is a beautiful spring green, on closer inspection resolving into two distinct shades. In the stem well and elsewhere the color is rich and saturated. In many other regions the green is glazed and milky.

These two veridian tints mix in streaks on most of the surface. The many large lenticels are lightest of all. The apple is firm and its aroma has citrusy overtones. 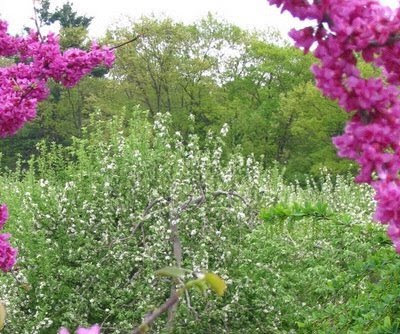 Though it's not obvious, these are the same two trees I photographed last Summer and Fall.
Posted by Adam at May 10, 2009 leave a comment 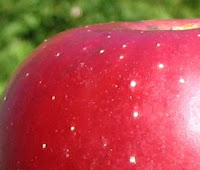 These are the pores of a plant. Apple lenticels can be distinctive and decorative. Apples breath and transpire through these pores, which may be portals of russet and disease.

Some varieties are susceptible to a blight known as lenticel breakdown, which mars the fruit with ugly brown pitting. Lenticel breakdown is especially troublesome for the apple industry as it does not manifest until after packing. It can be aggravated by washing and by some of the chemical treatments to which commercial apples are routinely subject. Gala is especially vulnerable.

The Ballad of Arkansas Black 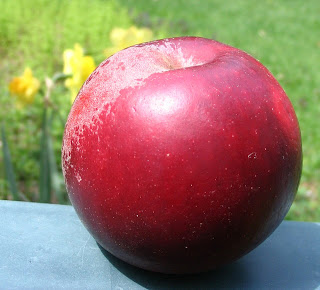 Here among the daffodils is my final Arkansas Black, picked more than six months ago. It's the very last of my autumn stash and I just ate it.

This unusual apple has held up remarkably, but sampling one every month or so has shown a gradual change over time: a (very) slow softening of texture and melding and mellowing of flavors. Arguably this variety was better in January than in November. By March it was clearly past its prime, though still toothsome.

Some notable changes: texture, from very hard to granular (which might be mealy in another apple); flavor, from sharp with notable acidity and distinct flavors to more mellow and blended. One unusual flavor, which I described as "tobacco" or "vegetable," persisted for a long time but gradually transmuted into more of a baritone suggestion of molasses. Some flavors, like pear, persisted throughout.

I would have been curious to keep sampling these through the summer if I had more, but they are clearly best eaten earlier in the year and are not going to be everyone's cup of tea at any time.

That's the last of the local apples until late July.

For what it's worth, my periodic tasting notes on Arkansas Black follow, the many verses of a ballad documenting every minute change in texture, aroma, and taste. For the full effect you can also start with my original review.

Or you can just call it quits here--I won't mind.

How to eat an apple 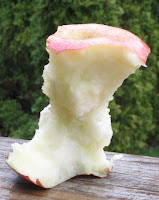 Of course you already know how to do this perfectly well! and perhaps you prefer yours sliced or even peeled and at a particular temperature. However, here are the steps I take when I taste an apple for a review (like these). And yes, you can try this at home.

I won't say this gives more pleasure than just munching away, indeed it can be difficult to sort out all those flavors and sensations.

But it is a kind of mindful eating, if a surprisingly cerebral one, that has increased my appreciation of apples. If you do this enough it will train your palate and perhaps your brain in some unexpected ways.

First step, though, is cleaning. Apples should be stored unwashed, so clean them when you are ready to eat. Waxed apples are washed after harvest, but subsequent handling can put dirt and germs on the surface of the fruit.

Do not neglect the stem well, which can trap dirt and pesticides. I usually just rinse and rub with warm water, but there are vegetable soaps available.