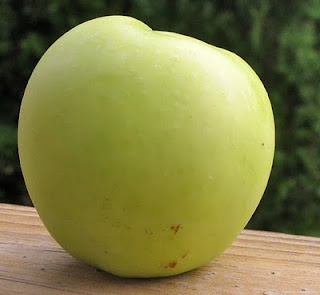 Two years ago, Red Apple Farm sold me some apples that I found exceptional. I thought they were Lodi apples because the grower said so.

This year, it turns out, those apples were really Yellow Transparents. So of course last Tuesday I let Red Apple sell me some more apples called Lodi, and of course I think that's really really what they are this time.

Okay, I see the pattern. But I'm getting fed. Pass the fruit.

These apples are on the large end of small, a delicate yellow-green that is mostly yellow on the sunward side, where there is sometimes a hint of pink.

The lenticels are numerous but not prominent, a slightly darker green, except that many also have a dark brown speck in the center which may be russet. (One clue that these are not Yellow Transparent apples is that those have sparser and more-obvious lenticels).

Lodi is ribbed and somewhat conical, feels firm in my hand, and has really no aroma. Its calyx is tightly clenched.

Lodi's flesh is a fine-grained dense white shot with green, pleasingly crisp. The flavor is tilted to the tart side, with lime and grapefruit notes and a whiff of gingery spice, but there is some tempering sweetness. These are nice complementary flavors and the overall effect is light and refreshing.

Lodi was introduced in 1924 by the New York State Agricultural Experiment Station at Cornell, a cross between Montgomery and Yellow Transparent.

Many sources describe Lodi as having soft or yielding flesh, so perhaps mine are on the early side. Or maybe some other factor is a play: the Lodi apples I bought from another grower on July 14, though unripe and not as good, were less firm.

Some sources suggest that the Lodi is good for cooking and applesauce.

Sorry for the mix-up, and I'll be making changes to reflect the right information over the next few days.

Update: It took a few years, but I was finally able to bring Lodi and Yellow Transparent together for a head-to-head comparison.
Posted by Adam at August 06, 2010