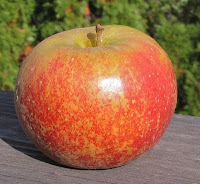 This apple's name means--oh wait, no it doesn't. (And shouldn't that be des Reinettes?)

Etymological questions aside, I have two of these, both on the small side of large, round, slightly oblate, with the merest hint of ribbing.

Both have significant russeting on the unblushed peel, which is a muted green-yellow. 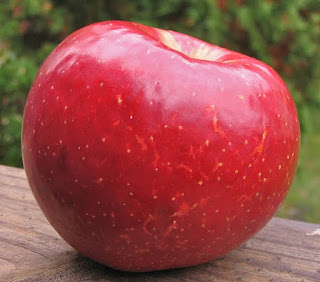 No new apple has had the buildup and ballyhoo enjoyed by today's variety. I have been hearing about it for years.

Today we'll learn if Sweetango lives up to its reputation.

Sweetango is breathtakingly beautiful. The glazed red blush of many of the the samples I saw ran strikingly deep and dark on the sunward side, though elsewhere the color is more of a pink wash tinged a bit orange, no doubt from the underlying yellow of the peel.

When I saw those Calville Blancs at Farmers Market the day before Thanksgiving, I knew I had to bake a real tarte aux pommes.

Despite the black bits this was a delicious holiday desert, and what really made it so were the apples.

describing a carpet ("tapis") of red and gray apples lying on the ground. Russets perhaps, for the gray. 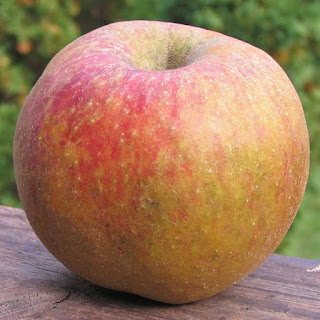 Medium-sized, large for a russet, this apple has a rough golden jacket over bright green peel. Some blushed stripes peep though at intervals, and a small patch of dull red blush is mostly russet free.

Lenticels are also full of russet and really only noticeable in the blush, though they do bulge out slightly into small tactile bumps.

Foolishly I held on to this one a few weeks longer than I needed and there's a bit of give to it when I squeeze, but russets can hold up marvelously and it is only November 12.

Hunt's texture is yielding but still good, fine-grained flesh shot with green highlights. Not super juicy but full of sugary flavor enlivened by some sprightly tartness. The usual russet flavors of pear and cane sugar are well presented, and also a hint of lemonade, a nice touch. 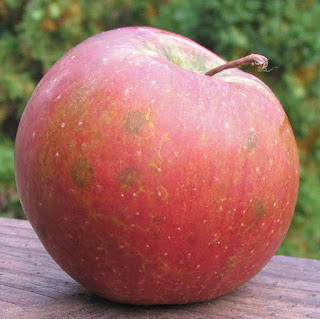 The larger of my two samples is medium big, classically shaped (though lopsided) with just a hint of ribbing. The smaller sample is oblate. On both, a dull red blush covers nearly all the yellow-green surface to differing degrees of streaky translucency. Tan lenticels of varying sizes irregularly mark the surface.

The larger apple had a few soft spots, from handling or perhaps Tropical Storm Irene, and was generally inferior. That's the one I photographed, but my tasting notes are based on the smaller, better Domine.

That one's flesh is medium-grained, white with a greenish cast. It's got a crunch, though a yielding one, and the peel is chewy but not bad. Domine's flavors are well-balanced with some sprightly tartness. It's a slightly vinous and there is also a little acidity, but there's also a good portion of initial sweetness, along with vanilla and spice.

Apple clubs versus the tyranny of the market

Last year a reader asked about the practice of "managed varieties," restricting to a cartel the rights to grow the hottest new apples.

Also called club apples, the licenses to grow these fruits fund the marketing that helps to create demand for them (or, if you like, that brings them gently before a discerning public).

Meanwhile another reader was already looking at club apples and their implications for agriculture, and this week he published his work in the New Yorker.

John Seabrook ("Crunch") tells a fascinating story that includes a brief history of the fruit before zeroing in on the apple club that grows Sweetango, heir (apparently) to Honeycrisp. His enthusiasm for this crisp and flavorful variety is infectious.

Clubs and the future of apples

For must-read apple journalism look no further than the November 21 issue of the New Yorker, where John Seabrook explores apples and the American apple industry.

His "Crunch" includes an engaging description of the modern apple-breeding program of the University of Minnesota, touching on the phenomenal success of UMinn's Honeycrisp and giving us a farmer's-eye view of the apple business.

This telling quote from Dennis Courtier, a Minnesota orchardist: "It doesn't matter if the apple is green on the inside, when the market is telling you that color is more important than taste."

This legendary French pastry apple is not really for eating out of hand. But eat we must. 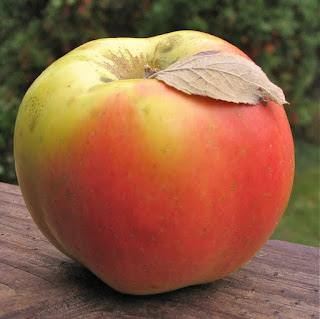 Calville is a large medium (or small large) apple with pronounced, even exaggerated, ribbing. It is yellow tinged with green and there is a partial blush over perhaps a quarter of the peel. Large green lenticels are prominent though not in the blush. In hand the unbroken fruit feels firm and solid and smells of pear and bananas.

Inside Calville Blanc is a light yellow with a tender crunch, fine-grained and dense. Its flavor balance tilts slightly to the tart but there is sweetness too, to frame pear flavors with a hint of banana in the finish. There are also some unusual salty, mineral notes. 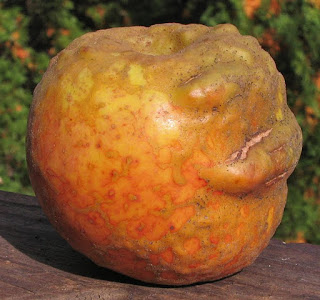 Its brooding appearance is daunting, but this was far from the most grotesque sample of this unusual apple. Others were so deformed as to be unrecognizable as part of any living organism, let alone as an apple.

Instead, the medium-sized sample I chose shows a little of everything: Yellow skin, mottled translucent orange blush, and disfiguring russet. Or perhaps its knobby bulges are not related to the russet at all. Small lenticels, where visible, are mostly russeted.

Where not deformed this apple seems to be modestly ribbed. Its calyx is open and it feels firm and solid. It glowers.

As I contemplate this unusual variety, I wonder: What if this is not just a curiosity? What if it's really good?

Only one way to find out.

I just ate my last Stayman, left over from early October. It had improved with age.

Still wonderfully breaking crisp and very juicy, spicy with some savory notes I had missed when I sampled these in October of 2008.

I wish I had a few more of these! Now I know. 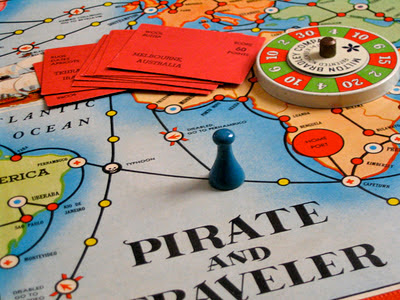 I grew up, pre–video console, loving board games of all kinds. Roll the dice. Spin the spinner. Take a card. Collect $200. Advance around the game board, tap tap tap.

One such that has not survived into the present day was Milton Bradley's Pirate and Traveler. It was really two different games in one. 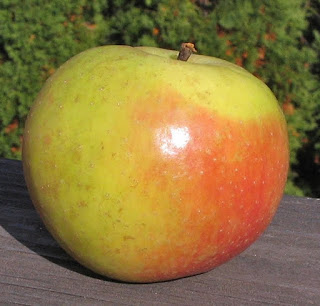 The appearance of this apple, subdued yellow-green mottled by russet, with a splash of translucent red blush, is not promising.

Belle de Boskoop is a large medium-sized apple with a slight amount of ribbing and a sweet cider aroma.

Light lenticels are not obvious except where russeted over.

Her flesh is a bit yielding, light yellow and halfway between fine and coarse-grained. The flavors are generally pleasant, for there is a decent amount of tartness to balance the pure cane-sugar sweetness. 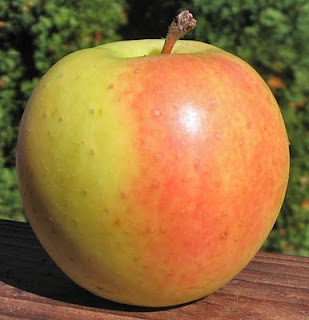 In October, Phil's pitches these as tasting like Macoun. They are very different apples, yet I can see parallels. Both are excellent and have floral overtones in their respective flavors.

As a bonus, Suncrisp is a great late-season keeper to hold and eat in December.

This large medium-sized apple, conical and slightly ribbed, is mostly a light spring green, the hues shifting through various shades to nearly yellow.

The blush is a translucent red wash, rendered a bit orange and dull by the peel color behind it.

Suncrisp has irregular lenticels rough with russet and is nice and firm if you squeeze one. 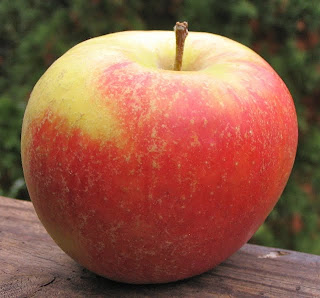 These run large to very large, though not tall, and are conical to a nearly top-heavy extent.

A translucent red blush covers about half of the peel, which is otherwise yellow tinted with a little green. The underlying yellow gives the blush an orange cast but it is subdued.

Small lenticels are also understated (except when russeted), presenting as green against the yellow and an almost invisible tan against the blush.