In 2012 I found some illegal local Sweetangos for sale here in Massachusetts. Illegal because the license for this hot new variety is strictly controlled, to the point where no one in New England is allowed to grow them.

Although the bootlegged versions were substantially different from the licit ones in appearance and flavor profile, I was more than half convinced.

Sweetango seems to be so variable based on growing conditions and handling. I hadn't yet had a good one, either.

Also the apple was pretty tasty in its own right, and so (I reasoned) why fake a Sweetango connection when you could patent, develop, and market the apple yourself?

But today I not only refute the Sweetango claim. I unmask this apple's true identity.

So long, it's been good to know yuh

Volante Farms, in Needham, Massachusetts, was selling an astonishing 35 kinds of apples today.

Can you get yourself there? Because if you can and you don't, I do not see how you will ever forgive yourself. 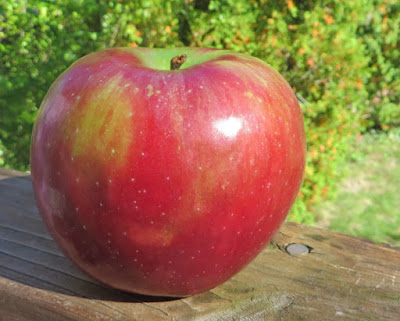 This large glossy apple is apparently a bit fragile, showing many small dings and bruises despite being well packed for its trip from Minnesota.

Somewhat lopsided, Regent is round and a little conical. You really have to peer at it to find any ribbing at all.

The apple has a faint sweet aroma. Regent's appearance makes me think of the Mac family and so I am hoping for a nice snappy crunch.

I was especially interested to taste Malinda, the matriarch of the Minnesota breeding program, after trying her offspring Haralson and other North Star apples. 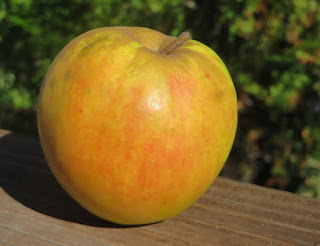 So, feast your eyes. No one is obliged to agree, but I find this kind of painterly apple beautiful, russet, flyspeck and all. 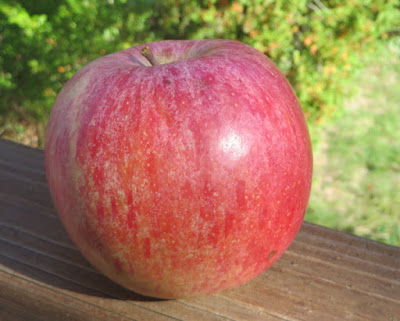 Another Midwest variety! Grown in the Midwest. More on that anon.

This very large globe of an apple has only the suggestion of ribs.

The green-tinted yellow peel peers through a streaky red blush; the view from the top seems to resolve into thousands of fine lines radiated from the stem well:

There’s a satin semi-gloss shine on the peel, and the calyx is open. 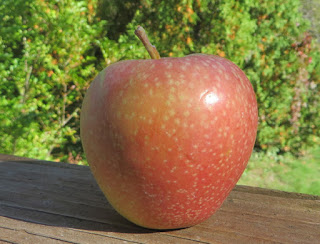 In 1951, an author published in the Fruit Varieties and Horticultural Digest made this plaintive request about Celestia, an Ohio apple from 100 years earlier:

Have we lost it forever? Any clue leading to its recovery will be appreciated by a number of apple growers.


On October 8 of this year, I found Celestia at farmers market. 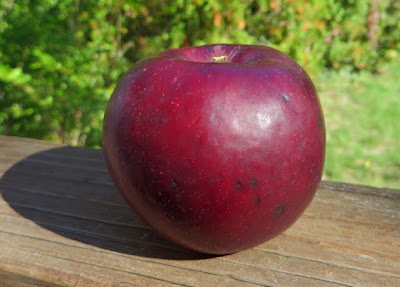 Today's photo mostly fails to capture Ruby Jon's intensely deep shade of crimson. In the past I've also been unable to depict the similarly dark hues of Arkansas Black and the mahogany reds of Black Oxford.

This image shows a dark red, but the reality is darker. Does the problem lie with my camera, the online medium, or my own limits as a photographer? 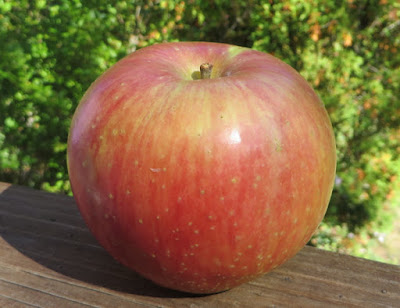 This hefty classic may be the second-most famous product of the apple-breeding program at the University of Minnesota. (The first? Need you ask?)

Thanks to a generous reader, I have two Haralsons straight from the North Star State. My description leans on the better of the two.

The most wonderful time of the year

We had 24 varieties of apples at farmers market today, including 2 kinds of Macs.