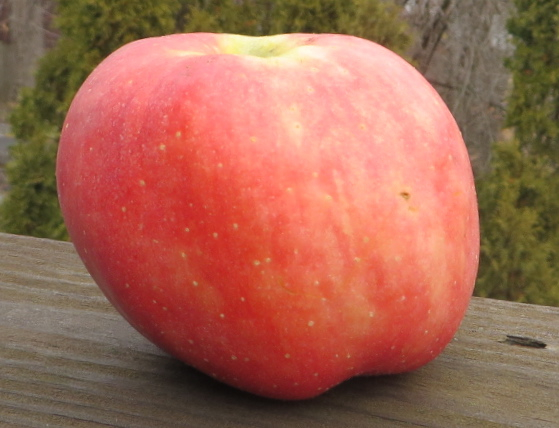 After a month or two of storage, these bear a sweet aroma. The peel is a bit waxy.

Inside, the apple has yellow fine-grained dense flesh that is crisp but not breaking. Its flavors are well balanced with a nod towards the sweet side: vanilla caramel and grain, also hints of peach and, intermittently, tangerine.

I'm tasting mine at the very end of December and can only guess how these flavors have mellowed in storage.

The best thing about this apple, besides its obvious virtues as a keeper, are how well its tastes blend into a harmonious whole.

There is quite a bit about York online. I am not surprised to learn that York is considered a good baking apple and outstanding keeper. Many articles mention its lopsided shape, which all the samples I saw exhibited to some degree.

Virginia Apples describes York as having a "deep red" blush. This must be an artifact of a longer, hotter growing season, and indeed this variety, rarely cultivated this far north, may achieve its best expression in Virginia and Pennsylvania where it remains popular.

Along those lines Apples of New York v. 1 (1905, 386) recommends against "planting in New York, except perhaps in the southeastern part of the state."

For all that, my samples grew in the Empire State north of Albany.

York originated in the early 19th century on a farm in Grantley, Pennsylvania (York County). There is a marker on the site nearby where Jonathan Jessop first propagated it.

Other names include Johnson's Fine Winter and York Imperial, the latter a tribute to its quality as "Imperial of Keepers."

In my mind (and with no basis in botanical reality that I know of) I think of York as a cross between Calville Blanc d'Hiver and Esopus Spitzenberg.

I only found this apple at a market last Saturday, and I am especially pleased to be able to end the year with an apple review.

I write other stuff here, and like to think that some of it is good, but the tasting reviews are really the heart of my project at Adam's Apples.

Happy year's end to you! May your winter apples all be sound and sweet.