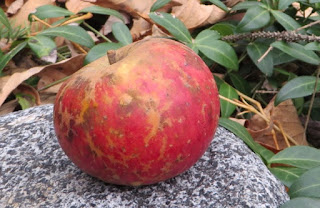 This old Irish apple has a marvelous painterly look, with Celtic knots of russet, lenticels, and sooty blotch dancing across the red-blushed peel.

I got seven heritage apples to try at Cider Days on November 4, and this is the gnarliest.

These Scarlet Croftons are small oblate fruits with a little give. They have probably been off the tree since September. Crofton's unblushed peel is a light yellow.

Whenever harvested, Crofton's texture in early November is good—yielding and a bit tender, but crisp. The flesh is medium-grained and snowy white.

Crofton is a sweet apple, with delicate flavors that are faintly floral and that hint at berries. The peel leaves an aftertaste suggesting green beans, and there is a very mild trace of vanilla mid-chew.

Haricots verts aside, these are conventional flavors, though pleasing ones.

The National Fruit Collection (UK) tells us that the Crofton traveled from England to Ireland ca. 1600, then returned to England in the early 19th Century.

Scarlet Crofton has triangular pips that are large for such a small apple. 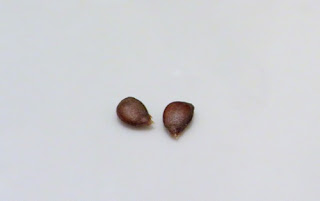