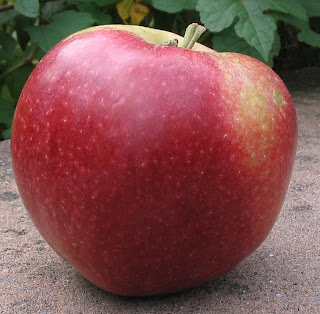 Large, ribbed, and lobed, this cross of McIntosh and Worcester Pearmain wears a red blush over spring green, with many light lenticels visible in the blush. One sample is lopsided, with odd lobes and scars; the other more regular and with russet radiating from the stem well.

Tydeman's flesh is tender crisp, a dense white with green highlights. It is sweet with tart, faintly vinous, with suggestions of light maple syrup and cider (see below) and delicate hints of unripe melon and caramel. This is an elegant apple with subtle flavors; it goes down easily. The chewy peel is not unpleasant.

A note on "cider." Tasting cider in an apple is no great feat, nor is it descriptive since apple cider can comprise many different tastes. I use this word to identify a narrow band of taste, rich and mellow, recalling sweet apple cider. It is a flavor of many older later-seasoned apples.

By no means all varieties taste of cider in this sense, and those that do usually have other flavors as well. Tydeman's appealing delicacy is based on part on the way it mixes both vinous and cidery flavors together.

The hollow core is quite large.

In any case, this Tydeman's is not the same variety as Tydeman's Late Orange, a later and qualitatively different apple.
Posted by Adam at September 04, 2009