Outwardly, Scarlet Surprise is a round, red apple, pretty if not remarkable.

Now imagine biting in to discover that the color is more than skin deep. Surprise!

To avoid surprises, the grower had sliced samples on display. But the true surprise lies in this apple's interesting flavors. 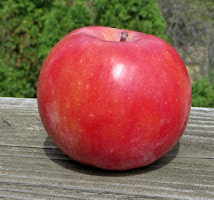 Scarlet is a medium sized apple, round and orange-touched red, with very little ribbing at all and small light lenticel dots.

The peel is glossy with natural wax, and there is a slight light-colored bloom in a few spots.

Instead of biting in, I cut. The sliced apple smells of berries and pumpkin.

The striking magenta-pink flesh is yielding and without much of a crunch, but it is juicy and pleasant, coarse grained.

The Surprise is well balanced, though on the tart side of that range.

The flavors include raspberries and citrus with a marshmallow note (the candy, not the herb). I found a little grapefruit flavor in parts of the apple.

There is also a spice accent that is based, I think, on the apple's acidity and a moderate drop of bitterness.

Another sample picked just a week later was soft and, in spots, mealy. But it also had the most distinct and vivid strawberry flavor that I have ever tasted in an apple.

I consider both apples interesting, but the earlier one was better for eating.

More than just a novelty, Scarlet Surprise will reward the attentive taster with some unusual and pleasing tastes and textures.

The red-fleshed apples do not always seem to develop their peak colors in this part of the world. The flesh of mine grows lighter towards the core, but there is also a distinct deep magenta spot near the center, for a bulls-eye effect.

Here's another view of that: 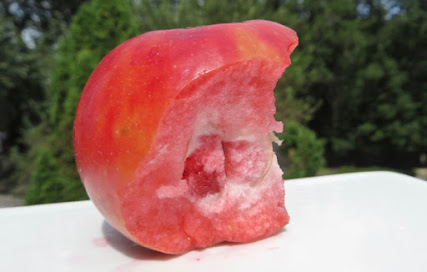 That darker area glistens like an uncut gem inside the apple. The coarse quality of the flesh is also on display in this photo.

Authorities seem to agree that Scarlet Surprise is another name for Bill's Redflesh, a found variety. Some also say that it has a third name, Firecracker.

I'm convinced that Firecracker, also red-fleshed, is a different apple.

Just as Scarlet Surprises's original name was Bill's Redflesh, there is some evidence that Firecracker is a trademark for a variety called Bill's Redflesh Crab. If so, that could easily have been a source of confusion.

Both are chance seedlings that may be related to an older red-fleshed apple called Surprise (which has a peel that is yellow, like Pink Pearl, not scarlet).
Posted by Adam at September 09, 2019