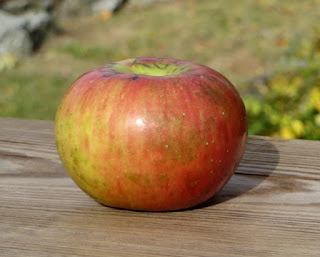 Wouldn’t it be handy if apples came labeled? Someone wrote “Crow Egg” on the top of mine with a sharpie. That's the mark of having lots of apples and wanting to keep things straight.

This oblate variety, on the small side of medium at maybe 2-1/2 inches across, has a streaky blush, red with some orange, over light green-yellow.

There is just one lone constellation of lenticels in the darker part of the blush, and a micro cluster of flyspeck in the unblushed region.

White fleshed, fine-grained, and not very juicy, the texture of this apple may be a little past prime but is still good. The peel is chewy.

Nutty roasted grain flavors mix with something fruity and with vanilla caramel. It's very pleasant: understated, but distinctive.

It's not clear what I’d have been able to tease out of a better sample, and I only had one. But the Egg brings a very interesting bundle of tastes, in the best possible way.

Crow Egg is an old variety, not to be confused with the southern Crow's Egg (which may be the Black Gilliflower). Several sources locate the origin of the Egg in Dedham, Massachusetts ca. 1830.

In 1905, Beech pronounced Crow Egg "practically obsolete." It is thus a special marvel to hold one in my hand and mouth more than 100 years later.
Posted by Adam at November 05, 2017