This antique variety--more than 200 years old--is beloved, even legendary. It has a wonderful name, at once old (think Nodhead or Hubbardston Nonesuch) and new (Honeycrisp, Jazz). 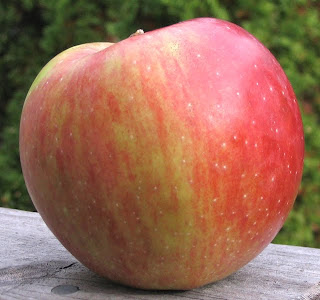 I have never tasted one before, so you can imagine my keen interest.

I am holding a large, classically shaped apple with a red blush, both saturated and streaky, over yellow green, a little on the dull side. Light lenticels, mostly at the bottom, decorate the blush; they are barely visible elsewhere.

There's some ribbing and, on my sample, flyspeck. Its calyx is closed, but not tightly, and it sits firm in my hand, with a faint cidery aroma.

Biting into this apple for the first time reveals dense white flesh with a faint yellow cast, medium-fine grained and crunchy crisp. Winesap's flavor is surprisingly mild, neither tart nor sweet. Perhaps this why I am able to notice a nutty taste, though it is not a strong flavor.

There is a hint of vinous clarity and fruit flavors at the start of each bite, followed by a kind of roasted flavor that is almost savory--what the Japanese call umami. Finally the thick peel dominates the finish, emphasizing the darker, almost vegetable tastes.

After the finish a kind of savoriness remains. The wine in this Winesap is surely a hearty red.

At the same time, this is not at all a heavy apple. Indeed, the wonderful contrast between the crisp, McIntosh-like texture and these faint roast-grain flavors is one of the things that makes this a great and distinctive apple.

The name Winesap is from wine sop, bread dipped in wine.

My usual approach, as in this case, is to taste and describe an apple without reference to other descriptions. Only when I have written my impressions will I fire up the old search engine and see what else there is to know (always learning something).

That research led me to descriptions of Winesap that disagreed so markedly from my experience (and sometimes from each other) as to make me at least question the classification.

It does not help that there are other varieties with "Winesap" in the name, but I can say for certain that this is not the Stayman Winesap (also known as Stayman), which I reviewed last year and which has a different appearance and taste.

If you know a different Winesap--perhaps the medium-sized fruit with yellow flesh that is sometimes tinged with red--I would be interested in hearing from you about it.

In the mean time, I trust the grower who sold me this fruit under this name. I also note that the photographs of Winesap in the National Fruit Collection (UK) are a nearly perfect match for what I have. (And NFC says another name for Winesap is "Potpie Apple"--is that the savory quality I noticed?)
Posted by Adam at November 05, 2009