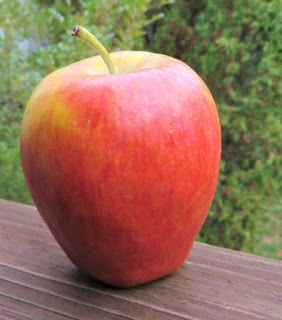 The name for this apple seems to promise a boatload o' sugar.

But you have to wonder why the marketing strategy of hyping the sweet stuff is so often the first resort for a genus of fruit that can be spicy, bracing, and wine-dark.

I have a bag of Sweeties, medium to large and so elongated that it is almost a silly-putty parody of the classical conical apple.

(Read further for an even thinner example.)

Most of these are also lopsided. The apple in the above photo leans so far towards the camera that it masks some of Sweetie's stretched-out length. Many of the samples just topple over.


A pretty blush of streaky orange-tinted red covers perhaps a third to a half of Sweetie's yellow peel.
Ribbing is very moderate, and the apple's small lenticels are most prominent in the unblushed regions where they are sometimes russeted or otherwise filled.

This apple reached me through a supermarket, so the gloss on Sweetie's peel is likely the result of artificial wax.


(Whereas tiny Wickson, at right in the second photo above, came direct from the orchard and has a natural-wax shine.)
Let's bite in.

Sweetie's medium coarse flesh is an unusual apricot-yellow. It has been off the tree since August and by October has a tender crunch.

The flavors are a bit washed out, but pleasant and harmonious: a faint trace of oranges, and a floral note, accent a sweet mild whole.

Closer to the core, the flesh is more conventionally light yellow.

Thought experiment: What if you diluted one Cox's Orange Pippin into a peck of Red Delicious?

This is not, let's face it, my kind of apple. It is also not the saccharin sugar bomb promised by the name. But fans of, say, Red Delicious might genuinely prize this mild fruit, though I suspect most would prefer a livelier crunch.

Incidentally, my first bite into this variety conveyed a very different impression, including caramel, black pepper, and ashes, along with the mild floral sweetness. Really not what I was expecting at all!

However, that experience was a one-off, and I conclude these flavors were an artifact of something on the apple, or perhaps peel flora.

This being the modern monetized world, the name "Sweetie" is trademarked. It's another Braeburn x Gala cross, and not the best of the lot either in my view. But, de gustibus.
Posted by Adam at November 03, 2016