G'day! The harvest is in Down Under, and apples from the Southern Hemisphere have arrived in our New England markets. The same varieties grow just fine here and many are available year round. However, I have arbitrarily waited until now before reviewing any of the many varieties that originated south of equator. 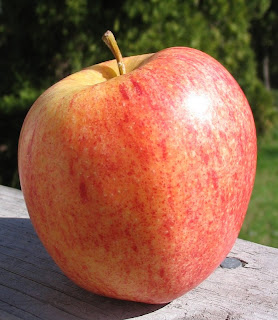 Today's striking apple is medium to large, ribbed and tapered to a round base of bumps around the calyx, which is closed. Some of the streaky blush is dark and some more translucent over the yellow skin, for a variegated orange effect. The many small light lenticels (darker than the unblushed skin, though) are not obvious.

My sample has a little give to it, and a lush fragrance that suggests Golden Delicious, one of its parents (with Kidd's Orange Red).

Gala tastes like daffodils smell. But I'm getting ahead of things. Its flesh is coarse and juicy, a light buttery yellow, and both crisp and tender. It does indeed have floral notes, but also a little pear and vanilla, and the mellow honeyed influence of Golden Delicious is obvious. This is a sweet apple, though not overwhelmingly so.

Gala should please many, as it is both mild and rich, and rewards the attentive taster with an interesting bouquet of flavors.
Posted by Adam at April 26, 2009 leave a comment

I put this special review into storage back in October. 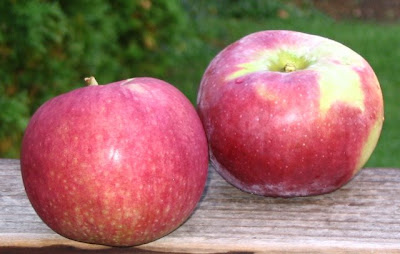 I couldn't bring myself to add any words at all to yesterday's gallery of apples, but each photo is a link to the review for that variety.

Also if you like you can play "name that apple" and test your own apple-spotting skills. Hover your mouse pointer over a photo for a few seconds and you should see a pop-up with the name of the apple variety.

Update: I now keep a (usually) up-to-date gallery of all my apple photos on a separate page. It is also available from the "visual" tab at the top of this web page. 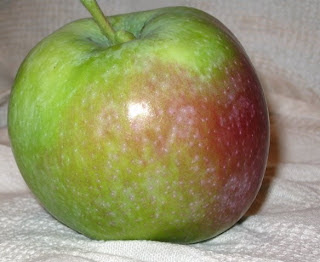 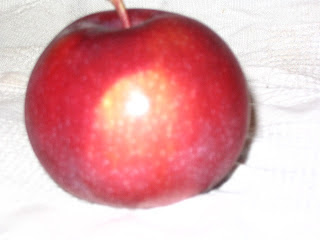 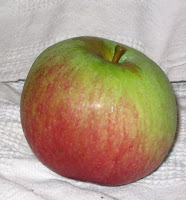 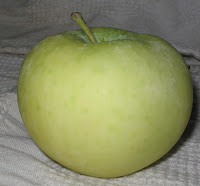 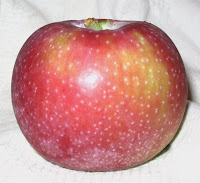 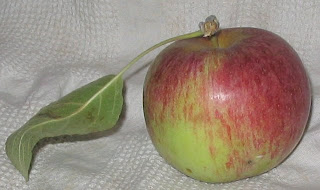 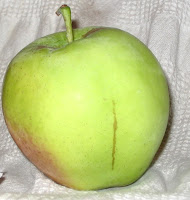 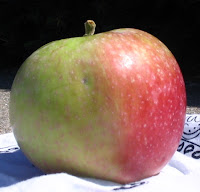 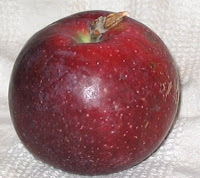 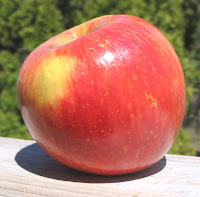 Fuji can be big, but my sample is at best a large medium. It is only very slightly ribbed, and the shape might be conical but with very little in the way of taper, for an almost rectangular profile.

The skin is yellow-green with a red blush that is light and streaky in most places; my photo favors a more-saturated patch, which shows the light lenticels to best advantage. The apple has a sweet cidery aroma.

Fuji is moderately crisp, with juicy coarse yellow flesh. It is light and sweet, with only slight tempering acidity. The peel is on the chewy side but is not unpleasant.

This variety flirts with sweet blandness but has an appealing delicacy. The flavor is not assertive and might have generic floral and berry notes.

Fuji comes originally from Japan, where it is very popular. My sample, like most varieties sold here this time of year, grew in Washington State.
Posted by Adam at April 11, 2009 leave or read comments (5 so far)

A thoughtful reader asks whether the Baldwin Apple Monument I describe is the original.

A second monument to the Baldwin apple would be, in some ways, more astonishing than the first. I picture an Edward Gorey tableau: two knots of Victorian gentlemen in a field, glaring at each other.

That's fanciful of course, and I'm very interested to know the truth of it. The New York Times story I cite ("Monument to the Baldwin Apple," May 30 1895, p. 3) concludes

The granite shaft which is to be erected by the Rumford Historical Association of Woburn is seven feet high, and is surmounted by a representation of the Baldwin apple.

That describes today's monument, and corroborates its inscription ("erected in 1895...")--one that gives no hint of having replaced any earlier commemoration. The Boston Globe, which is the source of the Times article, notes there is an additional inscription on the side of the monument, directing visitors to the exact spot of the original tree, "250 feet west, 10º north" ("Far Famed Baldwin Apple," May 1 1895, p. 9).

This inscription, with a helpful arrow, is on the northern face of the monument and is today obscured by shrubs. Possibly the monument aligns to that exact degree of orientation.

The main inscription, however, became controversial, and has been emended. According to the Globe, the inscription the monument bears today is wholly changed from the original, which read:

This pillar, erected in 1895 by the Rumsford Historical Association, incorporated April 27, 1877, marks the estate where in 1793 Samuel Thompson, Esq. while locating the line of the Middlesex Canal, discovered the first Pecker apple, later named the Baldwin.


This tells quite a different story than today, but is clearly chiseled on the monument's pillar in a photograph published in the Globe in 1908 ("Who Discovered the Baldwin Apple?" April 5 1908, p. 39). In that year Colonel Baldwin's great grandson produced two letters that mentioned the apple (identifiably, though not by name) nine years before Mr. Thompson "discovered" it. The level of interest in this controversy is a measure of the Baldwin's popularity at the time.

Mr. Johnson of the Historical Society responded by pointing his finger at an 1885 paper, "the best on the subject," by Rev. Leander Thompson, Samuel Thompson's great-grandson. The Globe says the question of Baldwin's origins had been studied by a special legislative committee in the 1850s. Perhaps the image of the seething bands of well-dressed gentlemen is not so far-fetched. 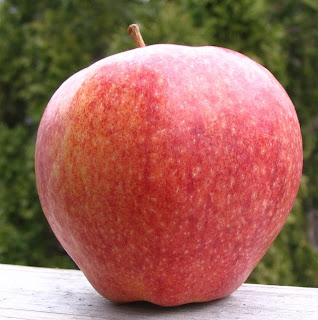 A chance seedling from Washington State, Cameo is large and tapered with an attractive variegated red blush over yellow. The many large light lenticels add to the effect, which almost seems to be in motion, flickering across all the shades from yellow to orange to red. Even after considerable storage, the unbroken apple is firm and quite fragrant, with tropical-fruit notes.

The flesh is a mellow yellow, on the coarse side and crisp. (My sample is a bit tender.) Despite the promise of its aroma the flavor is mild, sweet with a little tempering tartness. There is a fleeting hint of pear and something creamy, like vanilla caramel.

Wikipedia speculates that Cameo may be a Red Delicious - Golden Delicious cross, which would certainly be consistent with its appearance and taste.

Update: The Cameo hype on this  now-defuncts-but-archived industry web page is pure now only about 85% blather. (They rewrote it.)

Further Update: This variety was patented as Caudle and originally marketed as Carousel.