I have been feasting this month on Pacific Rose, Opal, and Piñata apples.

These three millennial varieties bring something long absent to the table: flavor. They are part of the leading edge of what I hope will prove to be a long-term trend towards taste.

Don't get me wrong: You could always get flavorful varieties at orchards, if you know where to go. Here's what I mean in terms of supermarket apples (North America version).

Two years ago I had the idea of comparing Macoun with Rubyfrost.

This was an appealing thought because both are products of the same breeding program in New York, separated by 90 years. But it proved not a fair match.

So this year I am back with what ought to be a more apt comparison: Rubyfrost (r) versus Empire, also from the same breeding program. 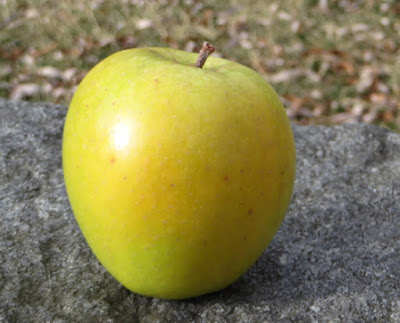 These are shapely tapered apples just on the green side of the yellow border. The color flirts with that border, sometimes crossing it on the sunward side where some examples sport a pale and tentative orange glow.

Ribbing is moderate, though in some samples there are nearly flat regions that intersect to create a distinct edge.

The many small light lenticels are all but invisible except where russet or some other agent discolors them. Green Dragon bears the striking fragrance of green-apple candy.

Very best wishes from me to you for the year to come.

This has always been a seasonal blog, overflowing with images and ideas in the harvest season but with fewer and more contemplative columns in the winter and spring.

But this year, to my surprise, I stopped writing for four whole months. I didn't plan that. Am I finally running out of steam?