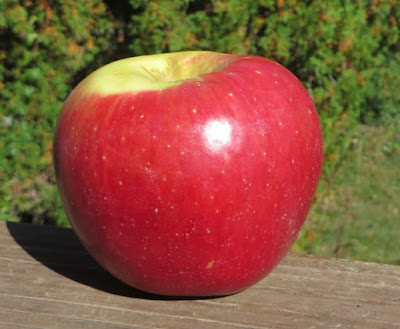 With its magenta-tinged red blush and prominent lentical spots, this large, round, slightly flattened apple reminds me visually of Opalescent. (Some are tapered.)

Pretty RosaLynn's shiny blush is streaky in places, but coverage is very good. The unblushed yellow region of the apple in the photo above shows where, probably, another apple cast its shadow.

These have deep stem wells and minor but real ribbing. Mine came all the way from Washington State. Enroute they lost any aroma they might normally have off the tree.

RosaLynn's medium-coarse yellow flesh is juicy and has a decent crunch. The balance is on the sweet side, with very little distinguishing flavor. I'd say, more vinous than not, floral, and slighty spicy.

If that flavor profile sounds familiar, then take a Macoun, sweeten it, subtract the berries, and dial back everything else. That will put you in the neighborhood, for flavor anyway.*

So: do we like this? Maybe in March, but frankly debuting here at the peak of the harvest is lousy timing.

I'm pleased to try a new apple anytime, but in the fall harvest I would not otherwise give RosaLynn a second glance.

The story of this apple is a charming one: a chance seedling found in an orchard in Washington and named for the wives of the two orchard managers.

It is one of many naturally non-browning varieties, making RosaLynn a good candidate for salads and fruit plates.

RosaLynn is pronounced as though Rosa and Lynn were separate words (which they aren't though I've seen it spelled that way). Not like "Rosalyn."

*Is it acceptable to describe an apple by referring to another apple? Because I did that twice in this review. Macoun, Opalescent.