Belying its name, the Snapdragon is neither (a) snappy and sharp nor (b) especially floral. 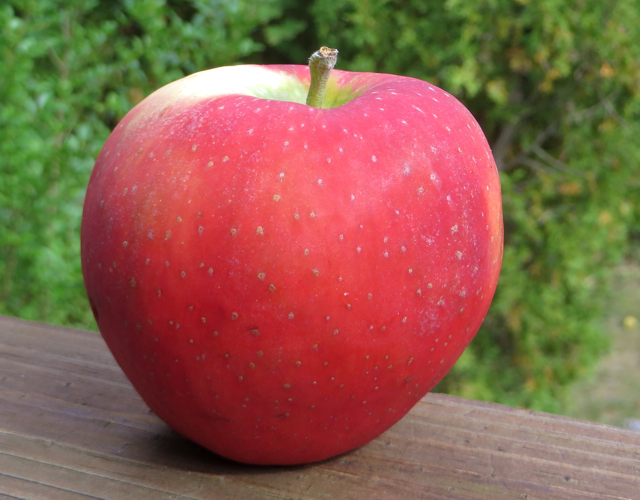 Instead it's a pleasant and mellow new variety courtesy of one of the oldest apple-breeding programs in America.

Large, conical, and moderately ribbed, Snapdragon's blush ranges from fire-engine red to shades of red-orange as it thins over the otherwise yellow peel.

Its numerous large tan lenticels really stand out. (Click the photo for a closer look.)

The fruit's calyx is mostly, but not entirely, closed. There's a nice cider aroma.

On the inside, crisp coarse yellow flesh, sweet but balanced by a decent amount of tart, is juicy and flavorful. The crunch is substantial but despite its Honeycrisp parentage a little restrained at the same time.

This another data point in my collection of next-generation modern varieties that seem to be distinguishing themselves with flavor. I like that trend.

Snapdragon and Rubyfrost are the two latest varieties from the apple-breeding program at Cornell.

They are still not widely available, and I am only able to taste them thanks to my Union Square (New York) greenmarket corespondent.

Snapdragon is a cross of Honeycrisp and an unnamed variety that Cornell describes as "similar to Jonagold."
Posted by Adam at October 08, 2015