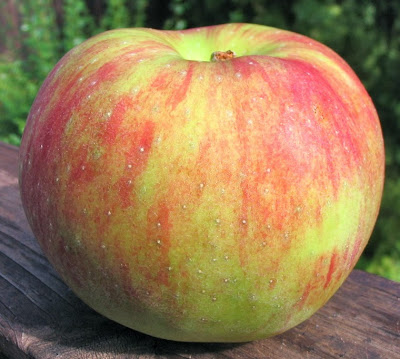 These oblate apples run from large to enormous with articulated ribs that stretch from crown to base. There is a streaky blush of attenuated red, sparse in parts, over spring green. Light lenticels get a little lost against this variegated background.

The snowy white flesh of this firm fruit is crisp and juicy, medium-fine-grained in a way that breaks of cleanly to the teeth.

Rambo's flavors are mild with a good sweet-tart balance. Generally, the tastes comprise a pleasant mix of vinous berries that could be part of the McIntosh family. There is also the suggestion of vanilla and the merest hint of something rather like minty tarragon. Nice.

Add these winning flavors to the Summer Rambo's great crunch and you've got a very satisfying apple.

Rambo is an old French variety introduced to North America at least 200 years ago as "Rambour Franc." The venerable Apples of New York has collected many other names for this variety including Rambour d'Ete, Charmant Blanc, and De Notre-Dame.

New England Apples says that Summer Rambo is harvested as early as the first week in August, but Apples of New York may be closer to the mark when it gives the season as "early Autumn." Mine were crisp and good in mid-September.