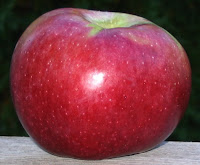 Ah, Macoun, lady fair! If McIntosh is the king of the New England apples, then Macoun, with its distinctive bouquet, is surely queen.

Macoun (pronounced "Ma-cow-an") is medium to medium-large and sports a red blush that runs from deep and purplish to streaky over bright green, freckled with small light tan lenticels. The fruit is ribbed--I've had three-lobed Macouns that boasted a triangular horizontal cross-section--but with considerable variation. The stem is short, which poses some problems for growers.

The flesh is a snowy white sometimes tinged with green, fine-grained, juicy, and very crisp. Macoun tastes wonderful--a nice sweet-tart balance with hints of strawberries, plus spice and floral notes.

The fruit's wine-like acidity swims thrillingly in the river of these flavors. Macoun's distinctive savor lingers like a cool drink and elevates this apple to the first rank. Eating one is a treat.

Macoun is a cross of McIntosh and Jersey Black that was developed in 1932 at the pomaceously prolific New York State Agricultural Experiment Station in Geneva (New York). They are available around here from September through early November, and at farmers market Macoun commands a premium over other apples.

Which I gladly pay. I admit it: this is my favorite eating apple. I just finished one and wish I had another.

Update: I took a second bite at this apple later in the season.