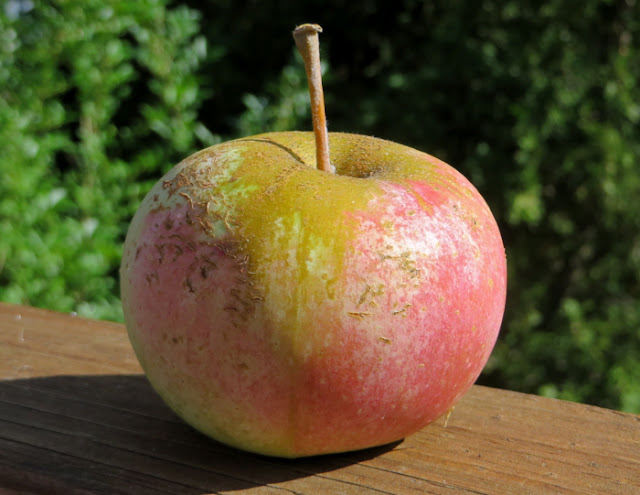 Tart and crisp, Red Astrakhan might give Paula Red a run for best early-season Mac-type apple.

Mine is medium sized and a little oblate, with a pale red blush that covers less than half of the otherwise green peel. That color is a washed-out spring green.

Those pastel hues and the tall stem give Red Astrachan an especially graceful and painterly look.

Red Astrakhan's flesh is fine-grained and white shot with green highlights. It is crisp to the point of breaking though there is a little give to the crunch.

I was expecting an apple slightly past its prime but this one is, to the contrary, a little early. As such, Red Astrakhan could benefit from a little more sugar; a better balance might showcase more flavors.

Even so it is a real pleasure to have these traditional New England tastes in early August.

Readers of this blog probably know that if I'm calling for more sweetness the apple is pretty tart. It may just be that another few days on the tree would have brought Red Astrakhan into better balance.

Several sources say this apple came to Massachusetts from Sweden via Britain, where the apple was first cultivated in 1816.

That would seem to rule out a direct connection to the McIntosh, which originated in Ontario just a few years earlier.

Some sources also give Red Astrakhan a Russian origin. Astrakhan is also the name of a city (and region) near the Caspian Sea not far from Kazakhstan.

The National Fruit Collection (UK) lists many alternative names for this variety, including Vermillion d'Ete, Abe Lincoln, and Anglesea Pippin.