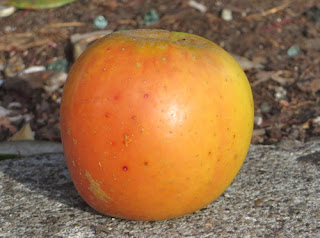 A really good apple I sampled back in 2017 is finally seeing the light of day here.

On the small side of medium, this attractive yellow apple sports a partial orange-bronze blush on the sunward side.

It has many tiny lenticels, some quite dark, but the most striking feature are several small round splotches of saturated red, like drops of paint.

There is some of this in both blushed and unblushed regions, and some of the lenticels are similarly colored.

Other than that, Pineapple Crunch has a classic apple shape with only slight ribbing. It smells like autumn.

Inside, crisp breaking juicy flesh is a light yellow, medium grained. It has a good sweet-tart balance and terrific flavors, starting with chamomile and pineapple.

It is also a little gingery and perhaps has a dash of lemon, but I may be getting carried away.

This apple is a real winner, flavorful and certainly sweet enough for modern tastes without going overboard. What would it take to commercialize this variety and get it in front of more people?

The crunch's flavors are distinctive and I believe that the public is growing more sophisticated about how things taste.

Blast from the past?

Another question: why unpublished until now? This write up is a little sketchy, but at this point I do not even remember exactly why I held it back.

I've got a few others in the bag like that, and this certainly seems like the right time to publish.

I got my Pineapple Crunch courtesy of the California Rare Fruit Growers.

I assume this apple is originated in the Golden State, but don't know much more than that. If you do, please share your knowledge in the comments!

Update: The Crunch is identified as an open pollinated Rubaiyat by Freddy Menge, quoted on this web page. Apparently I am not the only one who thinks this is a pretty special apple!

That and more in the best part of this blog, reader comments, below.