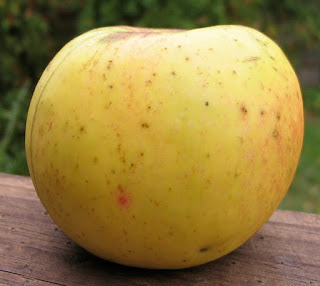 I had a tiny tantalizing sliver of this antique apple on a walk at Tower Hill. Now I've got a whole Tolman Sweet to eat.

Somewhere between small and large, this yellow apple is streaked with green, stippled with a light blotchy blush, and decorated with russety scars. Note the green seam running vertically down the left side of the apple.

Small lenticels are prominent only when darkened with russet (which is not unusual).

Tolman Sweet is round with a slight suggestion of ribbing. The peel is more matte than glossy. The apple gives just a little bit when I squeeze it and has a faint sweet fragrance.

Despite the "give," Tolman's flesh is crisp and delicately crunchy, a yellow off-white, fine grained, and only moderately juicy. Its flavors are sweet and refined. A little balancing tartness behind the scenes puts this in the range of the great eating apples.

Its tastes feel somehow high pitched, by which I mean that they are subtle and clean, white table grapes and flowers. Maybe some berries. It's very pleasant.

There's also something very clean and satisfying about chewing and swallowing this fruit. It just feels good in my body, and leaves a lovely sweet aftertaste in its wake.

This is an old-fashioned apple of excellent quality. Try one to see what kind of flavors were in vogue in the 19th century.

Tolman originated in Dorchester, Massachusetts, now (like Roxbury of russet fame) part of the City of Boston.

Beach (344) also says this hardy apple is "often marked by a suture line extending from the cavity."

May their number increase!

Update: A Mr. Peter Tallman has some family-historical information about this apple on his web site. His research suggests several alternative origin stories.