This large apple is oblate and a little lopsided, lightly ribbed. 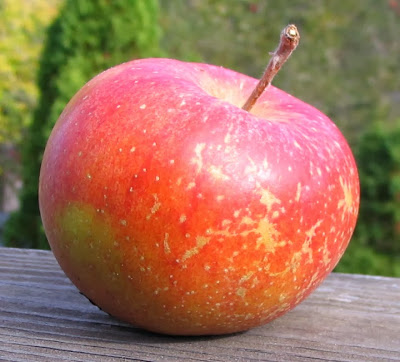 Its streaky red blush, tinged with orange, covers about two thirds of an otherwise green yellow, though in places that blush is so attenuated that it is not always possible to say exactly where it ends.

This sample has light lenticels, numerous, small, and indistinct at the bottom of the apple, and larger, spaced out, and noticeable on top.

The squeeze is firm, the calyx is closed, and the aroma a New England fall cider classic, sweet and a little musty.

There is some attractive crackling of russet on the sunward side.

The light yellow flesh is medium-coarse-grained and reasonably crisp, though leaning slightly towards mealy. King's sweet-tart balance is in the good zone but there is a little bitterness at one point.

There is some spice and a hint of melon, and a slight savory quality in the aftertaste.

Otherwise I would say that the flavors are unremarkable and a little weak. Perhaps an earlier sample might have been better.

I think King is the apple that Beech described, 100 years ago, as Tompkins King in Apples of New York. If so I might try for better samples next year, for Beech praises King as "excellent in quality for either desert or culinary uses."

Update: A really interesting discussion in the comments below, also, a second tasting for Tompkins King in 2019.
Posted by Adam at November 07, 2013