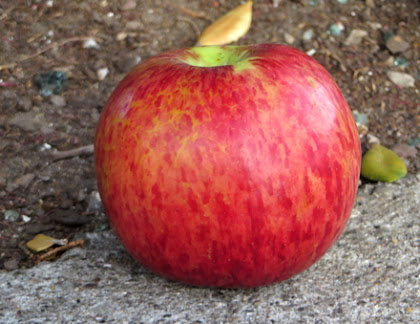 A parfait is a layered confection, and true to its name Pink Parfait has a pink layer within its off-white flesh (below).

From the outside, Pink P is a medium-sized green-tinted yellow orb nearly entirely covered by a translucent blush

The blush is flecked with many dark red spots and streaks. The apple is round with moderate ribbing

All apples have lenticels, the pores of the fruit, but they are essentially invisible on the Parfait. The peel is glossy. 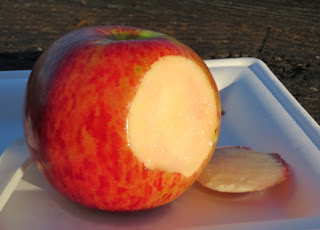 The pink in this parfait amounts to a faint layer of color inside an off-white sphere of crisp fine-grained flesh.

(On the other hand, a photo of this apple that was part of this newspaper story shows a more-saturated magenta. Less a parfait than a pudding, with some cream stirred in.)

On the tart side, but still sweet enough, PP’s flavors are similarly delicate and crisp. A hint of grapefruit and cane sugar, some zingy spiciness, and lemonade are embedded in the apple's pleasant substantial texture.

The flavors do not give out but are renewed as each bite liberates more.

Pink apples can be mere novelties, not very good, but I am really enjoying mine.

Honeycrisp fans might be put off by the bracing tartness but Pink Parfait's astringent finish is very refreshing and its crisp texture is first rate.

Pink Parfait, a registered trademark, is the name that Greenmantle Nursury gave to this apple found when exploring the old experimental orchard of Albert Etter.

Etter, one of the most creative apple breeders of the 20th century, was fascinated by the challenge of creating really good red-fleshed apples. Colored apples incorporate an asian crab apple and are often only decorative, with poor texture and flavor.

Etter succeeded with many pink- or red-fleshed varieties, including the Pink Pearl and the Parfait.

There’s a good deal more on Greenmantle’s Rosetta Apples page. Note that the photo of Pink Parfait on that page also shows more flesh with more-saturated color than I found in my one sample.

Readers hungry for more will be gratified, as I was, by Ram Fishman’s "Albert Etter and the Pink-Fleshed Daughters of 'Surprise,'" originally published in Fruit Gardener (California Rare Fruit Growers) 27(3) May/June 1995 and reprinted in 1996.

Fishman, a former president of the California Fruit Growers, runs Greenmantle Nursery with his wife and family.
Posted by Adam at November 04, 2015