He's a sweet guy, with some interesting flavors. 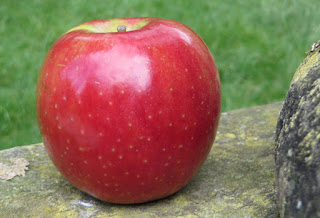 On the shade side the blush is but a streaky wash that gives the unblushed peel a dull brown cast. My apple has been knocked about a little bit and bears dents and scrapes from transport or storage or both.

Cripps Red (or Sundowner, or Joya, two trademarked names) bears a sweet aroma with a hint of spice. His calyx is open.

Red's flesh is medium-fine-grained and light yellow. The texture is quite good, and reasonably juicy, crisp enough to break off in pleasing chunks. Not, however, a hard apple.

The sugar level is almost too much, redeemed by a little balancing tartness. There is cane sugar, a hint of berries, and spice.

I have never heard of this apple for sale in North America, and found mine in France.

French PLU stickers do not always specify country of origin, but I wonder if mine is from the spring harvest in Australia or South Africa. The texture struck me as awfully good for a northern-hemisphere crop this time of year.

On the other hand Red is harvested into December, and there were all those scrapes and dents, so I would not be shocked if I were wrong.

The eponymous John Cripps is an Australian horticulturalist.
Posted by Adam at July 17, 2016