An unusual spring is coaxing apple trees into early bloom--and raising fears of a crop-killing frost. 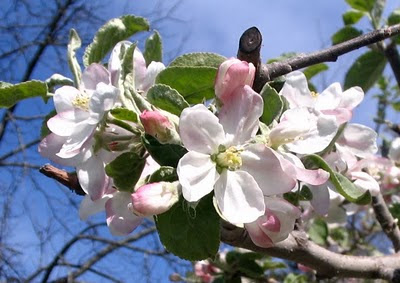 In some of my apple reviews I say that an apple tastes cidery or has hints of cider.

Tasting cider in an apple is no great feat, nor is it descriptive since apple cider can comprise many different tastes.

I use this word to identify a narrow band of taste, rich and mellow, recalling sweet (not hard) apple cider. It is a flavor of many fine old varieties, such as Jonathan, Nodhead, Northern Spy, Black Twig, Baldwin, and Newtown Pippin, but also crops up in some newer varieties such as Enterprise.

It is very like the taste of a freshly bruised apple, rarely dominant, and always (in my experience so far) part of a mix of other tastes, never alone.

This flavor is broadly accessible, not challenging to enjoy and appreciate. 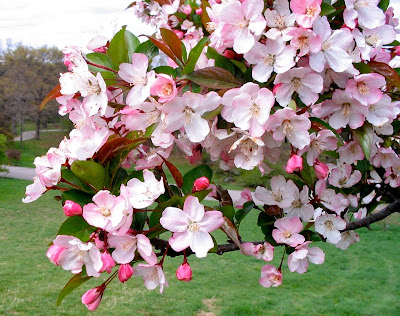 Update: More than you thought there was to know about these trees here.
Posted by Adam at April 21, 2010 leave a comment

In the left corner, ladies and gentlemen, a towering figure in the world of fruit, an apple variety of near-legendary proportion, sought-after, elusive, and prized.

And in the opposing corner...come again? 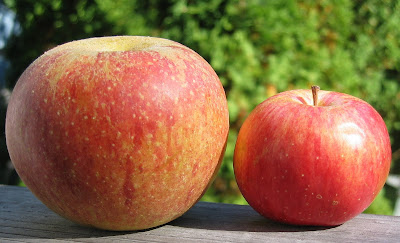 The idea for this comparison came to me at first bite of the Chestnut Crabapple and eventually became irresistible. It's not as ridiculous as you might think! though Cox's is all I have said and more.

Proclaim Liberty throughout the land 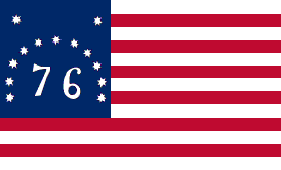 Apples are bought by the likes of you and me (with, one hopes, our usual flawless taste). We might be lured by one of those sleek modern names like Zestar or Honeycrisp, crafted to suggest sweetness and a snazzy, jazzy zestfulness.

Apple trees, on the other hand, are bought by growers, and sometimes the marketing effort is aimed at them.

The association's web page, launched in late 2008, describes 64 158 of the more than 200 varieties that grow here, including many heirlooms. It lists orchards, recipes, and its own set of links, and offers other information to the hungry and curious.

If you'd like to know where to buy some of these apples, the "find a farm" search will let you discover, for instance, that Esopus Spitzenberg is available from Champlain Orchards in Vermont. Unfortunately, right now searches on too many of the varieties listed produce empty results.

Regular followers of my blog may notice some familiar faces in the Association's gallery of apples, at least for this spring.

Alexis de Tocqueville visited America in 1831 and famously found a nation of civic groups. In keeping with that tradition, the association provides services for its member farms and the apple-eating public, including supermarket promotions, an annual meeting, a lending library, and a newsletter, the McIntosh News.

Update: The Association's leadership also has a blog, also called New England Apples. As of the end of 2014, the web page had grown its catalog of apples to include 158 varieties.

Off-season substitutions, or what to eat in April

Despite its "April" title, this post might be helpful from December through July, if you are missing your favorite apples.

If your favorite is available year round, like Red Delicious or Braeburn, you might still want to try something a little different.


Most of my "try" suggestions should be available year-round, or nearly so, but a few have more-limited sales windows.
Posted by Adam at April 01, 2010 leave a comment