What a wonderful name for a fragrant apple. 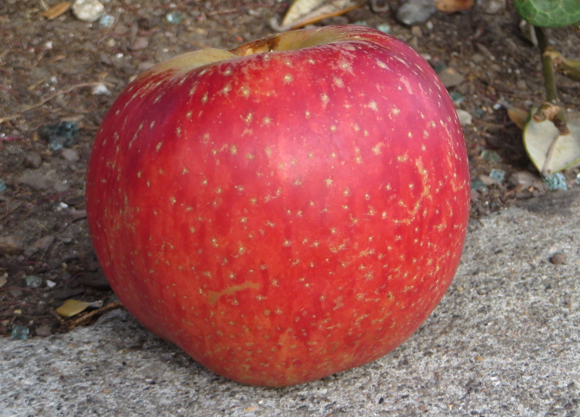 My lovely Cornish Aromatic is quite big, ribbed and broad and a little tapered. It's got a very pretty translucent orange blush with darker red streaks in it.

It seems clear that the unblushed color would be yellow if we could see it, which we nearly can where the blush is thinnest.

All that is spangled with many large distinct tan lenticels. Look at it, like a huge round strawberry. I find it very handsome.

Cornish Aromatic lives up to its name with a splendid aroma, rich and heady with a brandy note.

The light yellow flesh is fine-grained with a yielding crunch. It's not very juicy and might be a step on the way to mealy, though still quite pleasant to chew.

Indeed it feels particularly good going down in the same way that some old-fashioned American apples do, such as Blue Pearmain (though Cornish is not nearly so dense) or American Beauty. There is something about the quality of the texture that is especially satisfying in the gullet and the gut.

Cornish's flavors are balanced and mild, slightly floral and even more slightly vinous. There is even a hint of grain in the mix. It's sweet, too, but does not cloy.

There is however another fleeting flavor I am having difficulty describing. It might be close to the watermelon candy I have found in some apples. Or I might be chasing phantoms.

It's a good thing I had a large sample because this one had several flaws--big breaches of the peel and cracks deep into the flesh--so that I could not eat all of it. I wish I could have, though.

Orange Pippin has a nice short description of what sounds like a better sample.

A web search of this variety shows up many British nurseries selling Cornish Aromatic trees. Clearly it remains esteemed in the United Kingdom more than 200 years after its discover in the West Country.

That in turn suggests it might do well in New England. However, mine grew in California.
Posted by Adam at October 25, 2015