A famous, fabled apple that many feel is simply the best. And, yes, it is fabulous. 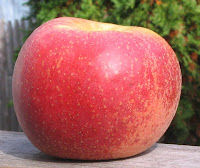 Cox's Orange Pippin runs medium to medium-large and is round, oblate, and ribbed. The blush is indeed an orange-red, sometimes uneven, over yellow green and with considerable russetting.

Brown lenticels freckle the whole surface, which is matte, not glossy. Cox's sits firm in the hand and smells slightly mossy or grassy.

The flesh is creamy light yellow and more fine-grained than that of its reputed parent, the Ribston Pippin. It's got a tender, but substantial, crunch and carries a moderate bit of flavorful juice. And, those flavors!

This is a wonderfully well-balanced apple with a complex bouquet of tastes: cider, a hint of cinnamon and hazelnut, and strong orange and mango notes.

The even sweet-tart balance is the perfect backdrop against which these flavors gracefully unfold.

Compared to the powerful and unruly Ribston, Cox's is more refined and disciplined but no less flavorful. The general effect is marvelously complex, rich, and satisfying on more than one level.

Small wonder that to many connoisseurs Cox's is the best desert apple. Yorkshire-based Orange Pippin, its very name a tribute to this variety, praises Cox's and concludes

Flavour is a very personal thing but Cox's Orange Pippin is "essential reading" for anyone interested in apples. In terms of flavour it is unquestionably the benchmark against which all others are measured, as well as being (along with Golden Delicious) one of the most influential apple varieties for apple breeders.


Orange Pippin makes other notes and comments about Cox's, and lists 24 daughter varieties, an indication that the fruit's qualities are prized by breeders as well. (Vintage Virgina lists a few more offspring too.)

Across the years, Robert Hogg (The Fruit Manual, London 1884) tells us that Cox's originated in 1830 in Colnbrook, near Slough in England; today this is just west of Heathrow Airport.

Cox's remains popular in the United Kingdom despite difficulties in cultivation; in America this variety is not widely available (but worth the hunt).

My samples this year grew in New Hampshire, but Shelburne Farm in Stow is one Eastern Massachusetts orchard that has them for picking (in season).

The seeds of a ripe Cox's Orange are said to rattle in their cavities when the apple is shaken, but I could not create this effect.

Update: The rattle is here.