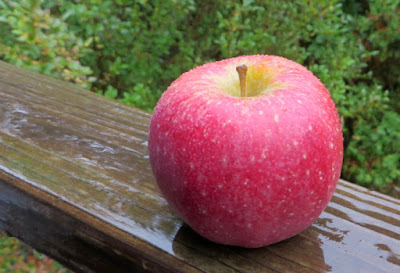 Its handsome red blush, streaky, russet-blasted, and set off by distinctive light lenticel dots, is complex and pleasing. The underlying yellow, edged with green, shows through to degrees in some regions.

There are patches of russet in the recess around stem and calyx (which is closed).

The apples are on the large side of medium, one more tapered than the other (which is shown above), and modestly ribbed. Unbroken, they are firm and carry a promising whiff of yeast.

Firecracker's light buttery-yellow flesh is breaking crisp with just a little "give." It is coarse-grained and very juicy.
Despite a little moderating acidity, the overwhelming first impression is sweet, to the point of obscuring Firecracker's flavors.
There are strong spice notes and a little vinousness; the aftertaste includes, as best as I can make out, some banana and a savory B-vitamin presence that might be coming from the peel.
The Cracker is firm and crisp without being hard to eat. Its crunch is just right.
In contrast with another new variety from this breeder, Firecracker feels like a winner. Give it a try if you see it this fall!

That Which We Call a Firecracker

"Firecracker" is also the name of a second and very different variety, apparently bestowed for marketing purposes on a red-fleshed apple that was originally named Bill's Red-Fleshed Crab.
This sort of thing happens from time to time. There are two very different apples called "Maiden's Blush," one that is yellow and one with pink cheeks.
The two Firecrackers are not likely to be confused, except by search engines.
Firecracker's seed parent is a Golden Delicious sport, which was pollinated by a hybrid of Golden D x (Monroe x Melrose).
Speaking of names: The venerable New York State apple-breeding program at Cornell, the nation's oldest, has been rebranded as "Cornell AgriTech."
Posted by Adam at October 21, 2020