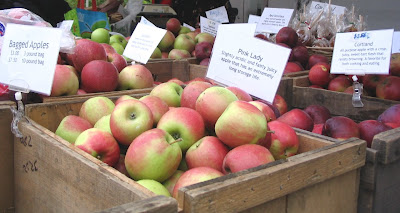 We are now at peak season and the apples are getting wild. The extremely popular McIntosh and Macoun crop is nearly all harvested, though still available (and delicious), and they have no obvious late-season heir. (The Honeycrisps are similarly done.)

Compare that bounty to the summer or early fall.

These are mostly modern varieties, but there are plenty of interesting heirlooms and antiques at the orchards.

This blog is going a little wild, too. I can't keep up with all the choices but have snagged a diverse assortment to savor.

I never planned to post here every day, and by rights I should hold some of these apples back for the off-season. For a little while, though, I will keep up the pace, to reflect the dizzying riot of peak-season possibilities. Eventually the dates of harvest and posting will start to diverge.