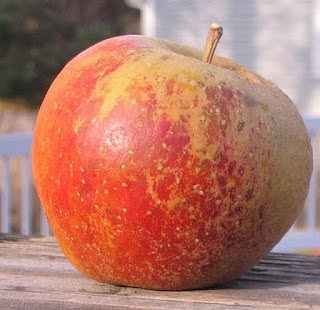 This Dutch apple has an attractive dark orange-red blush over a muted green that blends with sandpaper-colored russet. Large lenticels are similarly russeted.

I've only got one sample, a large medium or small large, but have no idea how typical its size may may be.

Karmijn de Sonnaville is an offspring of the exceptional Cox's Orange Pippin and shares some of its qualities. The flesh is fine grained and light yellow, and the flavors are balanced but with some acidity. Some Cox-like flavors, such as orange and mango, pair with a peppery spiciness.

Compared to Cox's Karmine tastes more acid and spicy and lacks Cox's nutty qualities. It's a first-rate apple with flavors that are big, bold, and lively. More of this sort of thing, please!

David D'Angelo, who shared this with me, said that Karmine's pollinator parent is not known but is probably either Jonathan or Belle de Boskoop. I could see either one. (Orange Pippin weighs in on this question too.)

The National Fruit Collection (UK) dates Karmijn de Sonnaville to 1949 in the Netherlands but the apple was not commercialized until the early 1970s. "Karmine" is apparently an Americanism.

David has a lot of enthusiasm about this variety and it is not hard to see why. I hope it catches on enough to become regularly available around here.