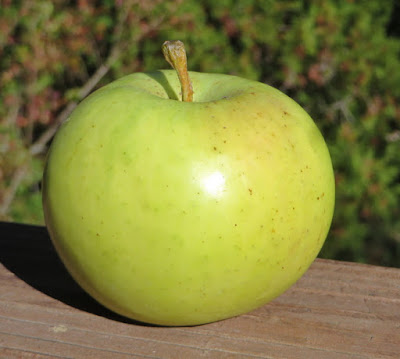 You wouldn't expect French apples to taste of Camembert, or English fruit to hint at tea and crumpets. But this surprising Asian variety—well, you'll see.

Don't you think this pale yellow-green apple is very pretty? Made more so by subtle green-on-green accents from some some darker streaks and lenticels. Mine run medium to large.

They are round and oblate without much ribbing, though one sample has some lobe-y bulges. Another, shown, has a small pale blush.

Shinsei's off-white flesh, more fine-grained than otherwise is delicately crisp. the flavors are lively, with a little bit of spice. Lime accents give way to green tea, for an unusual Asian effect.

This a truly charming apple.

This variety, a Golden Delicious x Early McIntosh cross, originated in Japan in the 1930s. Mine may been off the tree for at least a month.
Posted by Adam at November 13, 2016