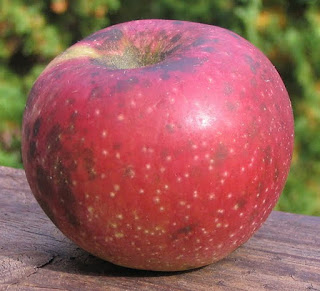 Red Canada is round with some ribbing and a deep stem well. A thin red blush covers about two thirds of otherwise spring green, and many large green lenticels cover the surface. The apple has a sweet aroma.

(A second sample, shown, is smaller and more oblate, with a blush that is stronger, deeper, and more complete.)

Red has fine-grained white flesh tinged with green, crisp though not quite breaking. It is pleasantly balanced and mild with cane sugar, kiwi, and a little light caramel note. The peel adds a chewy vegetable touch at the end of each bite. This is an agreeable apple that anyone should be able to enjoy.

There are two antique apples called Red Canada. The first originated in New England and was known as known as Nonsuch, Bristol, Red Winder, Richfield Nonesuch, and Winter Nonesuch; it reached Michigan (via Ontario) where it was widely known as Steel's Red.

The second is also known as Roseau. Tower Hill, which grew my samples in its conservation orchard, matches it with the first variety.

Some other names: Canada Red, Fessenden, Manning, Hovey.
Posted by Adam at October 24, 2011