Let us sample what may be the oldest apple cultivar of all, dating from Roman times. 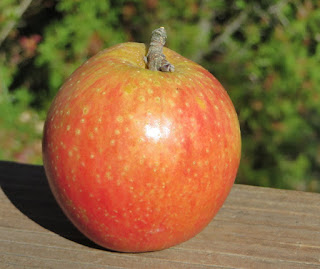 Of my two Decios, the photo shows one that is shaped almost like a prune plum, though with a little flattening on the top and bottom. The other, not shown, is squatter and more oblate.

Both have a streaky dull orange-red blush over a shade that is perhaps lightly more yellow than green Tan lenticels are not prominent. These small-to-medium apples have almost no ribbing and short, thick stems.

In the photo above, part of what appears to be the nurturing twig is still attached and nestled against the top of the fruit. (Click for a closer look.) The peel has a soft sheen.

The off-white flesh of this apple is notably dense, crisp, and hard. Although Decio is not very juicy, and bears only delicate flavors, it is as well balanced as one could wish, juxtaposing cane sugar with a crisp tart quality.

There is a very little toasted grain and some spice. Another elusive flavor dances between pear and vanilla.

I think Decio, with its unusual texture, might be an acquired taste for some, but this little apple has given me a great deal of pleasure. 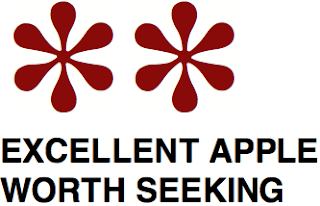 The estimable Orange Pippin and other sources in the British Isles describe Decio as soft and lacking in flavor. For once I am pleased to differ.

I wonder what it is about the air or soil of Franklin County, Massachusetts, that is so very different, for Decio, from that of Britain. They don't call my part of the world New England for nothing.

The scholarship is thin on Decio, but the conventional wisdom is that it dates from fifth-century Italy (or earlier) and was brought to Britain by the Romans.

Newspapers in Britain warned just last year of an impending extinction of this variety, but it is still cultivated in the area around Verona.

And of course in Massachusetts, where I got mine.

Pause, if you will, and reflect on what that means.

The Romans practiced the ancient art of grafting. Thus when this apple was bred or found growing on a tree grown from seed, Roman farmers cut budwood from the tree and spliced it into rootstock or other trees. The fruit was cultivated in what is now northern Italy.

Decio was prized well enough to bring to Britain, where it spread, and a millennium or so later traveled across the Atlantic. Again, in the form of budwood that was grafted onto other trees.

Here is the part of this story that I find particularly remarkable.

These budwood samples, transported and grafted, are of the same biological material as the tree that grew from seed in the Veneto fifteen hundred years ago.

The root of that tree died sometime before the final fall of Rome, but its branches will live for as long as we cultivate them.

Another word for budwood is "scionwood." Despite that, the tree in western Massachusetts that grew my apples is not a descendent of the Roman tree in the same way that I am my father's son.

It is rather the same wood, a living part of the same living tree.

Update: Decio is a pretty good keeper apple, too.
Posted by Adam at December 03, 2016