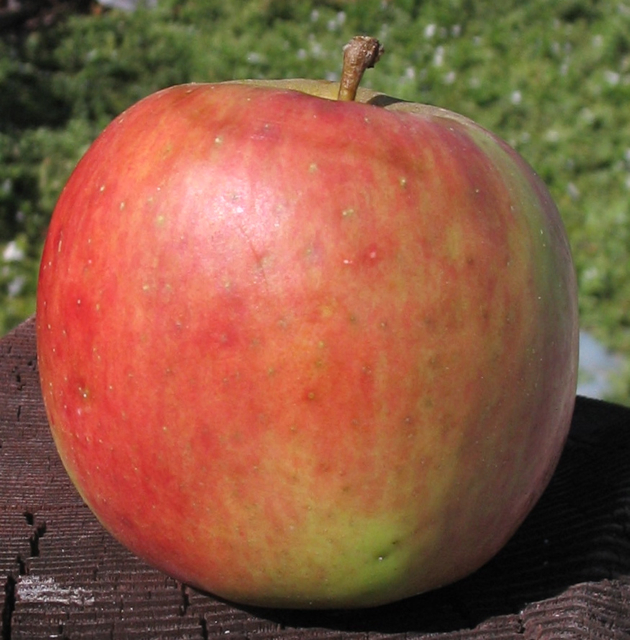 This is an old Southern apple, reputed by some to have been Andrew Jackson's favorite. And it has a name like a medieval pestilence (or a second-tier superhero.)

But what can we say about the Black Twig in person?

A medium-large apple, very firm in the hand, that has a patchy red blush over a green yellow skin.

The apple is decorated with small lenticels that are light inside the blush and green elsewhere. Its calyx is closed, and my sample bears one scar from the July 2 hail storm. The unbroken fruit has a rich cider smell.

Black Twig's flesh is a coarse light yellow, juicy, and crisp with a crunch. The flavor is mild and even, not acid, and the skin is thick and chewy.

I differ with those sources that describe the taste as "tart," though perhaps a little muted tart snap enlivens the other subdued qualities.

Accents are very understated but include cider and cane sugar and maybe a little spice. Or maybe I'm trying too hard. In any case this is a refreshing and light late-season apple.

The apple originated in Tennessee nearly two centuries ago but has sometimes gone by the name Arkansas or Arkansas Black Twig. This has led some sources to confuse Black Twig with Arkansas Black, a different variety.

It's a pleasure to find a variety like this growing locally--I gather they don't generally do well this far north and thus aren't often planted. I got mine at Nagog Hill Farm.

Sorry, I seem to have misplaced my usual photo for this variety. You can search online for one if you like, but no guarantees.

Update: A thoughtful reader took this photo of Black Twig.

Further Update: I've added a later photo of another Black Twig apple. Same variety, just not the sample I describe.