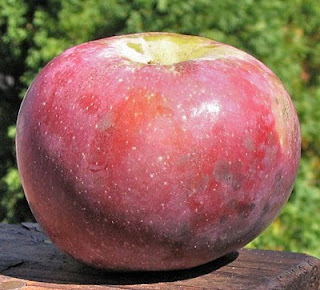 Like Early Spy, this is another apple with a purely "local" name. But it beats "NY428," this apple's official designation as part of the breeding program of the New York State Agricultural Experiment Station.

Sister is named for her relationship to the better-known Fortune, which was originally NY429.

This large, squat apple is ribbed and lopsided, her streaky red blush a bit dull and broken by jagged fractal areas. Light lenticels (and a bit of flyspeck) dot her skin. Sister sits quite firm in my hand and has a mossy smell (probably from peel flora).

Her flesh is very crisp, medium-fine, and juicy; white tinged with green yellow. The grower describes Sister of Fortune as "Mac flavor but firm," a puzzling statement since McIntosh is not exactly a marshmallow.

Compared to Mac, Sister is sweeter and not as vinous or complex. There is nonetheless a nice bit of tempering tartness (I should not want much more) and acidity, and a hint of berries, some vinousness, and cane sugar. So, a family resemblance. Her crisp firm texture is very good with these flavors and makes for an appealing and satisfying snack.

Sister's sister, Fortune, is a different apple, based on my tasting notes from last fall. Presumably these two varieties share some parents and many genes, so it is especially interesting to note how far, apparently, the apple can fall from the tree.
Posted by Adam at October 12, 2010