Crisp and light Pazazz might be a better-balanced Honeycrisp, enjoying similar crunch but without the extreme sugar hit that some find cloying. 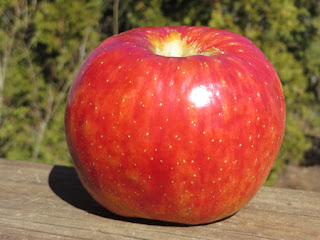 New varieties of apples are slow to make it to New England and when they do first appear their availability is limited and they are expensive. In a few years Pazazz will probably come down in price and be sold in supermarkets.

But I do not mind paying more to try a new apple, especially at the end of February.

I bought two of these and they do not look exactly alike. To be sure, both are both large apples and the coloring is the same, with a glossy peel that is likely waxed.

But the one shown is much more ribbed and its streaky red blush, which is over a pale yellow, is also blotchy (versus simple streaks in sample number 2). Both have large prominent lenticels but the apple shown has them spaced apart while the other sample displays many more close together, especially towards the calyx end.

The peel of each is subtly dimpled, like that of Honeycrisp.

They are both a little broad and blocky, and their heft and firm feel seem to promise the sort of sturdy crisp hard flesh that retailers and apple breeders prefer. (To be honest, consumers do too.)

Biting in does not disappoint: Pazazz has very coarse and crisp light-yellow flesh with an outstanding crunch that brings a boatload of juice. It's not one of those dense apples however and is easy to bite. The crunch manages to be both big and delicate.

Also delicate are this apple's flavors, on the sweet side as I've come to expect from a modern apple but reasonably tempered with tartness. There are both floral and spicy elements with a hint of cream soda. The flavors are on the mild side, however

I wouldn't call Pazazz vinous, but it would not surprise me to learn that there is a little McIntosh somewhere in this apple's pedigree. I'd also guess Fuji or Akane. These are pleasant flavors, and they complement each other well, but they are also a little timid.

The texture and crunch are very gratifying however, and Pazazz is a welcome addition to the winter cast of characters. Speaking of characters, typing the name of this apple really lets you exercise your Z finger.

Until recently it seemed as though every new variety was chasing Fuji or Braeburn; this one feels like it is following Honeycrisp.

Pazazz is, in fact, an open-pollinated descendant of Honeycrisp (meaning that the pollen parent is not known), and it shows. Compared to the Great Sugar Bomb, however, Pazazz is less tooth-achingly sweet and does quite well in storage.

One newspaper article quotes a claim that the flavors improve over time, which is quite possible.

Needless to day, I would love to hear what true Honeycrisp aficionados think of this one.
Posted by Adam at February 28, 2016