This is shaping up to be the Year of People Sending Me Apples.

This past summer Josh sent me what was probably Duchess of Oldenburg from his Eastern Washington orchard.

Josh thought so too. Hey, I got one right! And now the floodgates are opened.

I do not mind at all (far from it), but for the record let me explain why I probably cannot identify your mystery apple even if I have one to taste.

There are 17 thousands different varieties. As of this writing I have tasted less than 300 of them. And those are the known varieties; new chance seedlings pop up all the time.

Even if it's an apple I've had, it may taste different grown someplace else, picked early or late, or be one of those prima donna apples that vary from year to year.

Here are three more from Josh, one of which he's IDed for me. 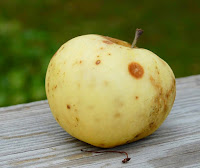 Apple 1, though, is a mystery. It's small, pale yellow, oblate and slightly ribbed, with brown mottling. Fragrant, sweet aroma

No. 1's flesh is soft, sweet, white, well balanced, sub-acid. More fine than coarse but on its way to mealy. Hints of lemonade. 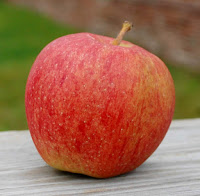 I've already posted a fuller account of eating the apple Josh sent, and I also reviewed this variety in 2013.

Nice texture, better than the one I had 6 years ago. It's still underwhelming, yet pleasant.

Apple 3 resembles an Ashmead's Kernel: smallish, with layers of red blush and mustard russet over a pale green. 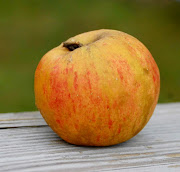 It has dark lenticel dots and is good and firm in hand.

The flesh and flavors are consistent with Ashmead: fine-grained off-white flavorful flesh.

There's a strong dose of both sweet and tart, some pear and lemon with a hint of vanilla.

There's no savory note, which Ashmead sometimes bears, but not always.

If this isn't Ashmead's Kernel I sure would like to know what it is.