The fall of an apple, historical records suggests, did set Isaac's Newton's mind to work on the problem of gravity. 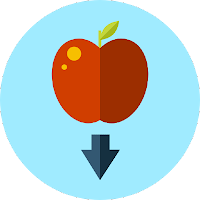 There is no evidence, however, that fruit met noggin.

The pomological record on the presumed apple, Flower of Kent, is murkier. Let's take these in order.

Why didn't the apple fall far from the tree?

After dinner, the weather being warm, we went into the garden and drank thea, under the shade of some apple trees…he told me, he was just in the same situation, as when formerly, the notion of gravitation came into his mind.

It was occasion’d by the fall of an apple, as he sat in contemplative mood. Why should that apple always descend perpendicularly to the ground, thought he to himself….

The apple engaged Sir Isaac's intellect, but not, as far as we know, his cranium.
Stukeley's holographic work has been digitized by the Royal Society and can be read online. The apple story appears on page 15.

Is that our apple?

Things get murky around the identity of the object in motion, thought to be Flower of Kent.
The location of Newton's apple tree is known. It grew, and indeed till survives (but see rerooting, below), at the site of his family's estate in in Lincolnshire.
Newton had repaired there from Cambridge in 1665 following an outbreak of the bubonic plague. Orange Pippin tells us

since it was the only apple tree in the garden, it was possible to identify the specific variety—it is an old English apple called Flower of Kent.

In the early 19th century, the Lincolnshire tree fell over. A branch rerooted itself and the tree survived.
According to some sources, Flower of Kent was a cultivar dating from the 16th century. A cultivar is a cultivated variety, so the Lincolnshire tree would have been produced by grafting, in which budwood is grafted onto rootstock.
Probably, the rerooted branch would have been from the budwood part of the tree—the Flower-of-Kent part. But it could have been from the rootstock.
If so, grafts from the rerooted tree would not bear the same apple as the original tree.
Whatever it is, have I got the right apple? It does not look the same as the one from the NFC (which the NFC forbears from actually calling Flower of Kent):


Note the tapered shape and recessed calyx at the bottom. My samples were round with projecting calyx ends.
The NFC also gives the harvest time as mid-October. However, my apples, picked a few days before the September equinox, are quite ripe.
The coloring and the ribbing are right enough, though. (Redder red on mine because of direct sunshine.)
Newton's apple tree, from the Lincolnshire estate, has been grafted multiple times. It grows in gardens near the physics departments of many colleges and universities.
Links:
Posted by Adam at October 27, 2020