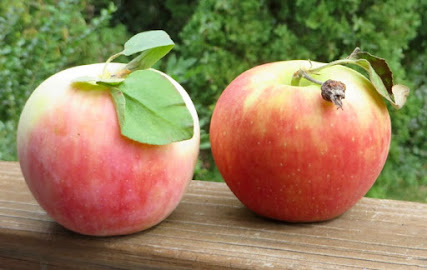 The two summer apples have tentaive blushes over spring green. Zestar's green is more yellow and pale, its blush more of an orange pink.

Elstar's blush is streakier and redder, and covers more.

Both have little tan lenticel spots in the blush. Elstar's are less numerous and more visible.

Zestar's stem is thicker. Its flesh oxidizes much faster, though both turn brown in short order.

Both are attractive apples. I guess I'd give Zestar the beauty prize.

But, how do they eat?

Elstar has white flesh with green highlights, medium coarse and juicy, with a satisfying crunch.

Its balanced flavors have a little tart in them, along with a stone-fruit note.

Zestar is sweeter, though still in the balanced zone.

Its off-white flesh is slightly more coarse-grained and also delivers a good crunch, though one that is more delicate. It bears notes of bananas and brown sugar.

I made this same comparison privately a week ago and decided that Zestar made the better snack.

Now, with Elstar nearing peak and Zestar perhaps past its prime, I reach the opposite conclusion, but only just.

Honestly, I'd say Zestar in August and Elstar after Labor Day.

But you might disagree with the second of those pronouncements if you are craving sugar.
Posted by Adam at September 14, 2018