What a difference nine years makes

I've finally replaced the worst photograph I've ever published on this blog with something better: 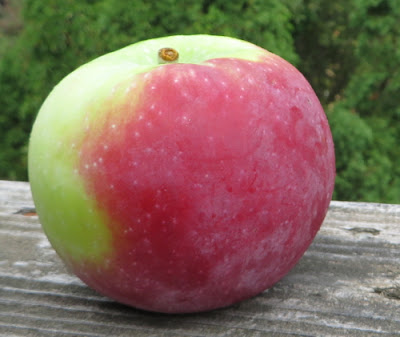 I still think I nailed it with the review, but the photo was just awful.


It's not so easy to take a good photo of an apple! or any object. Still, the 2008 Jersey Mac picture stands out as an especially weak effort.

But this blog has taught me many things, and today I occasionally sell my images. More frequently, alas, I chase down people who have liked my photos enough to steal them. (Pro tip: I also give permission to use my photos, but you have to ask.)

I started out by photographing apples indoors, on my kitchen table, under artificial light using a cotton dishcloth as a backdrop. I soon shifted to natural light outdoors, often on my back porch.

It's a look I like, though if I had things to do over again I would include a coin or other object in my photos to provide a sense of scale.

Want to use one of my photos? (Okay, probably not the Jersey Mac.) Ask nicely, and maybe. My copyright policy is at the end of this page.